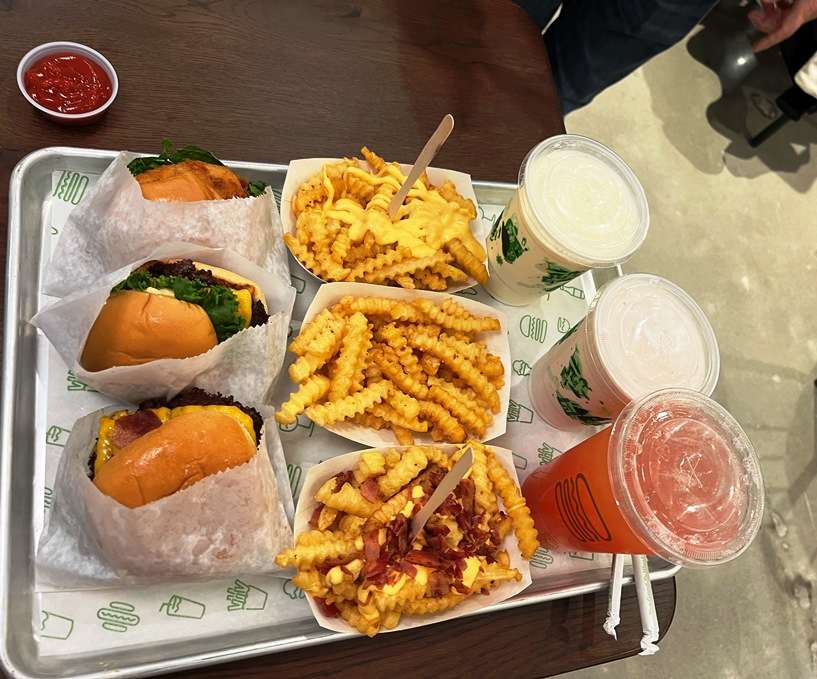 When it comes to a good burger, it’s hard to go wrong with Shake Shack! Founded in 2001 by restaurateur Danny Meyer, Shake Shack’s humble beginnings started from a hot dog cart in NYC and has grown to nearly 300 locations today. There was only one Shake Shack location in the NC Triangle (Waverly Place) until the second Triangle location opened up in December out in Chapel Hill. Here’s what to expect when you visit!

Shake Shack Chapel Hill is located in the very busy Eastgate shopping plaza (Trader Joe’s, Aldi) off of Franklin Street and my guess is that it will be even busier now! Look for a little stand-alone building with a side patio, this Shake Shack is a bit smaller and more compact than the Cary location. Inside you’ll find the usual counter order setup along with two kiosks to self-service your order! The menu stays the same: burgers, hot dogs, chicken sandwiches, drinks, milk shakes along with some adult bevvy (beer, wine) options.

My visit to Shake Shack Chapel Hill was for a Friends and Family event before the official public opening but everything was handled perfectly. You’ll be given a number on a stand to identify your order. Shake Shack would qualify as quick casual vs. fast food, expect a tab in the $15 range for sandwich, side, and drink. It should take 10 or 15 minutes for your food to be cooked to order so grab some condiments, napkins, and a table and hang loose!

The grill eats from Shake Shack are excellent with high-quality ingredients (never frozen meats, no antibiotics) and show off great preparation. The sandwiches are served on Martin’s potato rolls (soft, slightly sweet) and nicely toasted. Hamburgers are nicely smashed with some singe and the cheese is well melted on. I recommend the SmokeShack double which comes with cheese, bacon, cherry peppers, and the house Shack sauce. It’s a hefty sandwich with some serious weight and deliciousness behind it. Shack Shack also serves up a great chicken sandwich with lettuce, tomato, and onion on top of a thick, fried cutlet. Their chicken sandwich has won many accolades from food writers around the country.

Where Shake Shack gets a bit of criticism is its use of crinkle fries! French fries seem to be a very personal choice but I actually like the Shake Shack fries which are well-fried with crispy edges. They are really made for dipping whether you use ketchup, mayo, or cheese and the sauce clings easily to the ridges. The bacon cheese fries are awesome if you can spare the calories and sodium. And in all honesty, out of all the times I’ve been to Shake Shack, I think I’ve only ordered a milkshake once to keep the calorie count down. But rest assured that they are good and there will usually be seasonal flavors in addition to the old stand-bys.

While I love supporting my local businesses, there is always room in my foodie heart (and stomach) for high-quality chain restaurants. Shake Shack just delivers when it comes to a high-quality burger, fries, and more. And I expect this location to be super popular despite the tough parking conditions! So congratulations, Chapel Hill! Enjoy the second Shake Shack location in the NC Triangle, there’s one more scheduled to come to the Village District in Raleigh and who knows where else they pop up next.

Best New Restaurants and Bars in the Triangle, 2022 Edition
Next Post:A Visit to the New ZincHouse Winery & Brewery in Durham