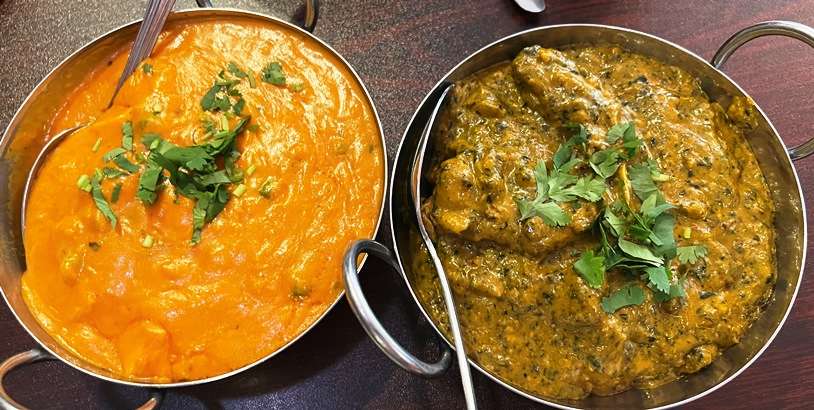 As a huge fan of Nepali cuisine, I admit that sometimes it’s hard to stray from your favorites. Given the blend of Nepali, Indo-Chinese and Indian classics, Nepali restaurants typically offer a broader menu that appeals to me. From Himalayan Range Nepali to Everest Nepali Kitchen, we’ve got some great options in the area but I’ve finally had a chance to try out Himalayan Nepali Cuisine in Cary. And while the competition is stiff, it offers up some great options in this flavorful cuisine, read on to learn more!

Located in a cluster of ethnic restaurants and shops, Himalayan Nepali has a long history of being in this space but with different owners. This corner location is a prime spot but you will have to navigate the worn-out parking lot to get over here! Inside Himalayan Nepali, it’s super simple. Tiled floor, a handful of 2 and 4-tops with some red globe lighting overhead. To start things off, Himalayan Nepali Cuisine brings some soothing ginger-lemon tea and complimentary papadam to the table. Grabbing the menu, a quick scan shows a pretty familiar menu: apps, momos, biryani, entrees categorized by protein along with some Indian breads to finish your meal. Most/all items are under $15 in price and are pretty affordable.

Over the course of several visits, I’ve had a good chance to sample a lot from Himalayan Nepali Cuisine’s menu and everything is cooked to order so be patient! For starters, try their chili paneer or gobi manchurian. The chili paneer is some lightly fried cubes of semi-soft cheese with a crispy coating and delicate chili flavoring, totally worthwhile. And the gobi manchurian consists of cauliflower florets also lightly fried and covered in a chili-soy sauce, delish. Oftentimes the menu at Nepali restaurants features Indo-Chinese flavors and dishes given their location in the region. I found the cooking technique here to be a bit lighter and simple compared to other options in the area.

Where Himalayan Nepali Cuisine really shines is their main dishes and entrees. Their chicken tikka masala is rich and flavorful, loaded with tandoor chicken chunks. And the chicken saag dish is wonderful, featuring chicken chunks in a savory, spinach-based sauce. All the mains are served with a bowl of basmati rice but I’d also recommend trying some plain or garlic naan for some dipping action! Portion size here may be a bit smaller than the Nepali competitors in the area but there’s plenty of food.

Burwell Farms: Finding a Treasure of White Truffles in a North Carolina Orchard
Next Post:The New Fenton in Cary, a Gastronomical Destination for the Triangle