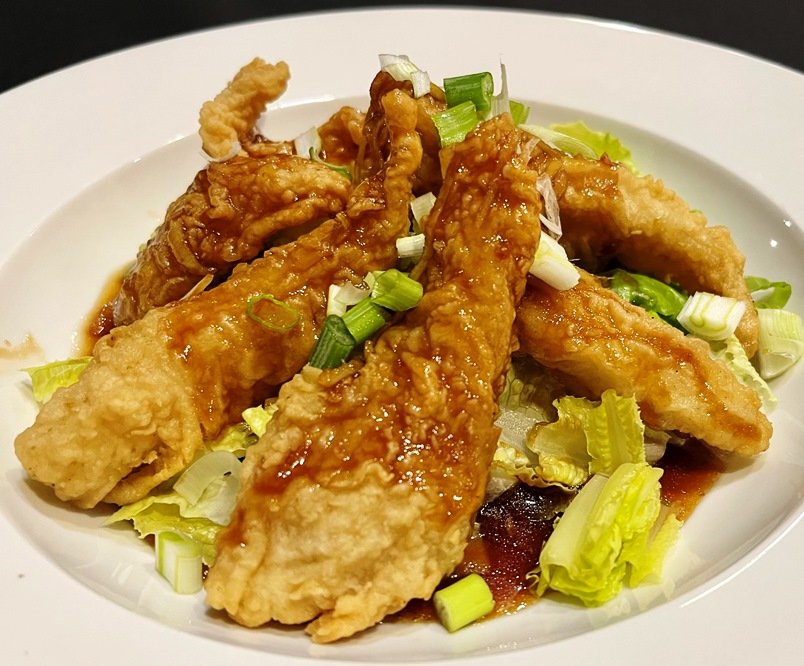 As a fan of Thai food, the Triangle has certainly had its ups and downs with the cuisine. There were times when we had quite a few good Thai restaurants and other times when we didn’t have many worthwhile options. Given the uniqueness of the cuisine and its melange of sweet, sour, spicy, and savory flavors, I get cravings from time to time and am willing to travel a bit to find good Thai eats. Some recent exploration led me to the relatively new Thai 54 in Morrisville which has been pretty good so far. Here’s what to expect when you visit!

Located in the newer Greenwood Village plaza off of Chapel Hill Road, Thai 54 sits in the back in a brick-faced storefront. The dining space inside is pretty humble. Orange paint, metal stacking chairs along with some children’s toys! Thai 54 is family-run so sometimes you will run into a younger family member hanging out in the dining room. Thai 54’s menu can be found online, they have a chalkboard specials menu in back along with a lunch menu for Monday to Friday. The menu spans the usual Thai stir-fries, curries, and noodles but also adds some sushi options. I’m pretty certain Thai 54 is related to Thai 55 out in S. Durham but with different chefs, so you’ll get a different menu.

Over the course of a couple of meals I’ve had a chance to dabble a bit but it’s been very tasty, overall. The tom kha soup starter is quite good. Clean with some spicy notes and complexity, they use a bit of lemongrass in it which is a nice touch. For appetizers the Thai angel wings are quite good. A boneless chicken drumstick is stuffed with pork, mushroom, onion, glass noodle, and then deep-fried. Served with some sweet-sour sauce it’s a solid appetizer. And the shrimp in blanket is a similar deal, stuffed with ground chicken and fried up in a wonton wrapper, nicely done and a good starter.

For the mains, Thai 54’s pad this is solid, thin rice sticks served with a decent amount of heat and tamarind fruit flavor. It’s a pretty basic presentation but a flavorful version. And the Thai crispy ginger catfish is a classic meal choice for me. Fish filets are lightly fried and drizzled in a lighter, gingery, soy-based sauce and served with white rice. I liked this version but probably prefer the way it’s prepared at their sister restaurant, Thai 55.

While I don’t usually get to dessert during a Thai meal, when it’s in season, it’s really hard to resist mango on sticky rice. The version at Thai 54 consists of perfectly ripe mango slices on chewy black rice! The texture is quite good with the sweetened, condensed milk drizzled on soft mango pieces and sitting atop the textured and chewy rice. A great way to end your meal with some sweet, savory, and fresh fruit flavor!

Service at Thai 54 has been solid for me but like many Thai restaurants I’ve been to over the years, it’s relaxed. So don’t be in too much of a hurry. Overall I’m pretty happy with Thai 54 although it falls a bit short of my current fave, Thai Station in Carrboro. While you’ll get good Thai cuisine here, the environment and ambiance is pretty basic so it’s all about the food at Thai 54. Enjoy!

News: Social and Drinking District for Raleigh, Live on August 15
Next Post:Mitch’s Tavern in Raleigh is BACK with authority and better than ever