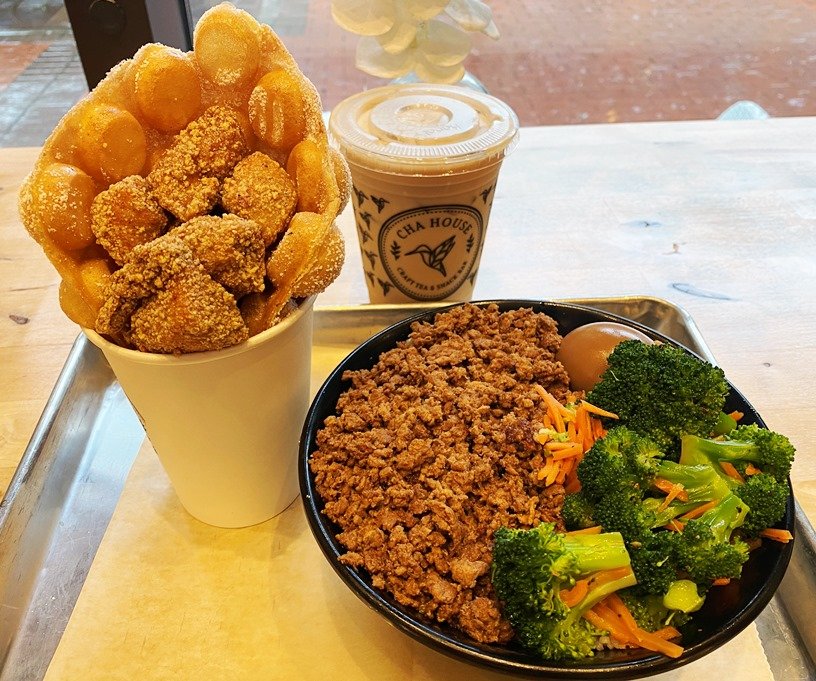 In the world of boba (bubble) tea, you’ve now got a lot of options in the Triangle! From Vietnamese restaurants to Asian cafes to dedicated boba tea shops, most of these options did NOT exist in the area four years ago. But one of your better (best?) boba tea options in the area is Cha House. The original location opened up in Chapel Hill and I’d always try to make a stop when visiting the area. Thankfully, they’ve opened up a second location out in Raleigh along with a third in Cary but here’s what to expect!

Located in the Stanhope building, Cha House Raleigh is probably their biggest location! Part cafe, part eatery, part tea house, the modern space feels pretty organic with pops of green and plants around the space. And there’s definitely room to stretch out in for studying or meeting up with friends. Upfront for the counter order, you’ll find chalkboard menus covering a wide swath of Taiwanese based drink and food. From boba tea to rice plates, snacks, and more but all pretty delicious in my opinion. You can customize your boba in a thousand different ways at Cha House. From tea to toppings along with various types of milks along with the amount of ice and sugar in your drink! I think the quality of tea used at Cha House is a bit better than most other options in the area and their boba (tapioca pearls) have just the right amount of softness and chewy bite.

After ordering up your eats you can grab a seat and make yourself comfortable. It usually takes 5 to 15 minutes to put your order together so it’s a good time to find your perch at Cha House. Communal high tops, window seating on the edges, and there’s even a funky little couch at the end of the space, set under white globe lighting. Cha House Raleigh is definitely a popular spot for the NC State student crowd and it’s easy to see why.

Some of my favorites are the standard milk tea (black or oolong) with boba and lychee for some fruity kick! The large diameter straw is key to slurping this concoction up. Also, the dirty tiger brown sugar tea is nearly like dessert in a cup. And while it apparently doesn’t have any caffeine in the drink, I’m pretty sure all that sugar and cream is going to keep you awake for a while!

But let’s face it, Cha House is focused on the cha (boba tea) but actually does a really nice job with the savory eats, too! The food menu runs from scallion pancakes to rice bowls and popcorn shrimp. The classic stewed tea serves up tasty, minced pork over rice with some steamed veggies and a soy egg. Super basic but wonderfully delicious. Or go with their popcorn chicken, perfectly fried and crunchy chicken pieces with a bit of salt and pepper for flavor.

A fun and weird option si the popcorn chicken in a bubble waffle! The same crispy chicken nestled in a light waffle, topped with confectionary sugar and maple syrup. A hit of sweet and salty for the tastebuds, yum!

As a boba tea fan, I really love having Cha House around in multiple cities (Chapel Hill, Raleigh, Cary) of the Triangle. Given it’s a franchise situation, the locations vary a bit in terms of design, size, and specials based upon the owner’s interests. Which is fine by me, in the end the overall quality is consistent for all the Cha House locations but I admit to being partial to the Raleigh location given its proximity to me. Enjoy it for an afternoon snack, quick meal, and casual meeting spot with friends. Cha House Raleigh is a welcoming and tasty cafe for all!

News: The New Dave & Busters in Cary, a Hop, Skip and Jump Away
Next Post:The Pink Boot for a Little Honky Tonk in Raleigh