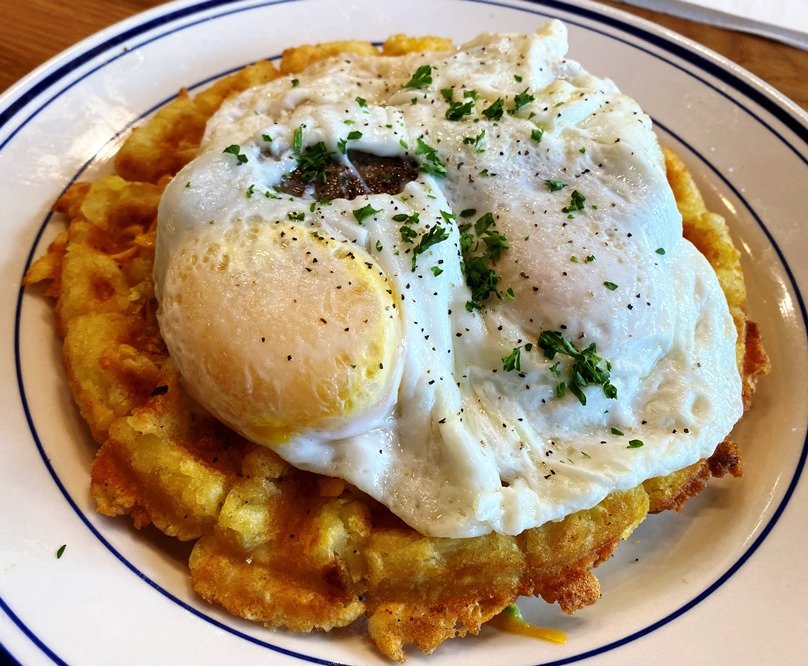 It’s interesting how some locations for restaurants seem to be tough for new businesses or restaurants. One spot that has seen a huge turn-over in terms of concepts is 359 Blackwell Street which is tucked between DPAC and the Durham Bulls Ballpark. This large space has hosted a barbeque restaurant, mini-golf venue, chili-wings spot, and currently, Press Coffee, Cocktails & Crepes. Now in my head I’m thinking “how in the world could that prime location just a stone’s throw from DPAC, DBAP, and ATC see so much turnover?” Well if I had to guess, it’s been a combination of the concept and the (most likely) leasing expense of that premium spot. But I’m hoping that with the arrival of Press Coffee, Cocktails & Crepe (Press CCC), we may have a lasting presence here!

Head on over to Blackwell Street, it’s that busy street that shoulders the American Tobacco Campus and DPAC. This office area is officially known as Diamond View 3, one of three buildings that circle the ballpark. Press CCC has done a lovely job renovating the space and it looks worlds better than previous incarnations. High ceilings, a coffee bar right up front and then a main dining room and back bar to the right when entering. There’s a mod, arched mirror behind the bar which reflects the space along with all the natural light pouring through the floor to ceiling plate glass windows. A lot of light-colored woods color the space giving it all an organic and casual feel, it reminds me a bit of a bigger Jack Tar and the Colonel’s Daughter which is several blocks away. And don’t miss their covered side patio for some fresh air eating!

Press CCC is primarily a breakfast and lunch cafe with hours from 7am to 6pm during the week and 9am to 3pm during the weekend. As such, you have a variety of crepes, sandwiches, and salads to choose from along with beer, wine, and cocktails. Start off with a coffee or latte to get the day going. Their coffee roast here is deep and mellow, good beans! One unique item that caught my eye on their menu is their hash brown waffles which are available on the weekends. The Traditional comes with your choice of breakfast meat and egg over a hashbrown waffle and it’s quite filling! My egg-over easy and the sausage pattie makes for a great meal.

For sweets, I’ve tried their nutella, banana, strawberry crepe which could work for breakfast or dessert. This hefty crepe is folded over four times, well-filled, and sprinkled with confectionary sugar. And for cocktails I’ve tried an aperol spritz, nicely done but their house cocktail menu is a bit short.

Overall I’m a fan of Press Coffee, Cocktails and Crepes and believe that it will do really well in this location. Even with their limited hours, the place has been regularly packed since it has opened. That being said, I wish the food and menu options were a bit more interesting. More creativity in the menu and food options would be great, it’s a satisfying if not memorable meal for me. So rock on, Press! You’ve started off with a bang, here’s to more and better.

Media: A’Verde Cocina Pop-up Dinner at Vidrio in Raleigh
Next Post:Fullsteam RTP Thinks Outside the Box for Beer and Food in Durham