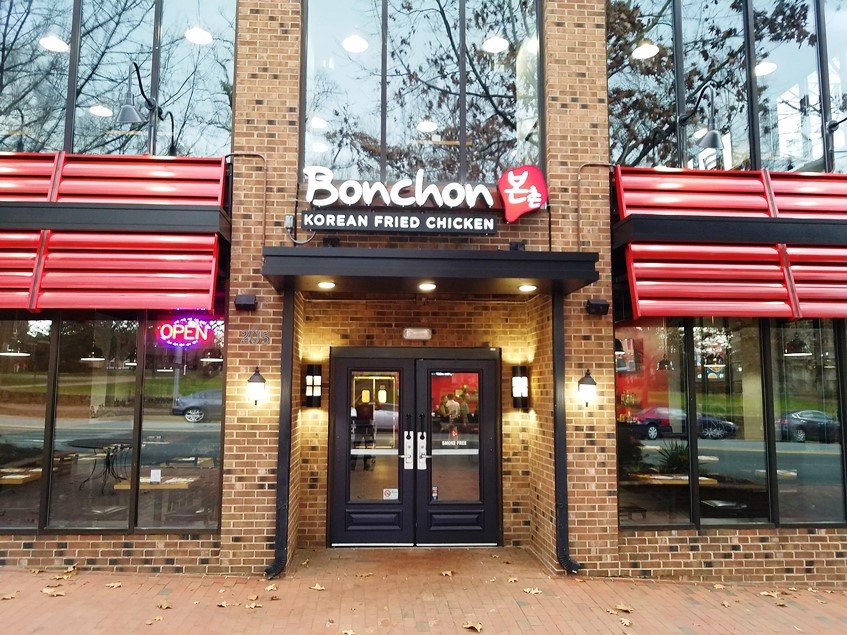 From the outside, Bonchon is pretty impressive! A two-floor structure fronted with plate glass windows, the interior is a simple cafe set-up with stairs in the back leading to a smaller 2nd-floor dining area. A bar to the right has a handful of HD screens showing the latest game, it’s all very simple and efficient.

Sitting down at a table, you do pick up the chain restaurant vibe given the paper place-mat explaining the Korean dishes on the menu. It’s all very helpful because to be honest with you, not everyone is familiar with Korean cuisine even though it’s seen a surge in popularity in the Triangle. For the Korean fried chicken, you can order it up in three forms: wings, drums, and strips

A great side to start with are the spicy fries at Bonchon! They’re lovingly served up in paper cone and have a light coating over the potato. Perfectly browned and crisp, dunking fries into the ketchup and popping them in your mouth becomes an exercise of self-control. These Bonchon fries are excellent and worth the calories.

Bonchon also offers a ton of Korean and Asian eats beyond Korean fried chicken. Bao buns, popcorn shrimp, takoyaki and a lot more. I’d describe the menu here as bar food, plus. I’d imagine a stop here after a night of drinking would be some fun.

As a fan of Korean fried chicken, I can certainly say that Bonchon hit’s the spot. But given that KFC has been in the area for eight or so years, the bar has been really raised and Bonchon sits squarely in the middle for me. But given there aren’t a ton of choices for Korean fried chicken in the Chapel Hill-Carrboro area, it’s a good option. Just be prepared to wait a bit for your food and order some apps to keep you tided over. Bon appetit!