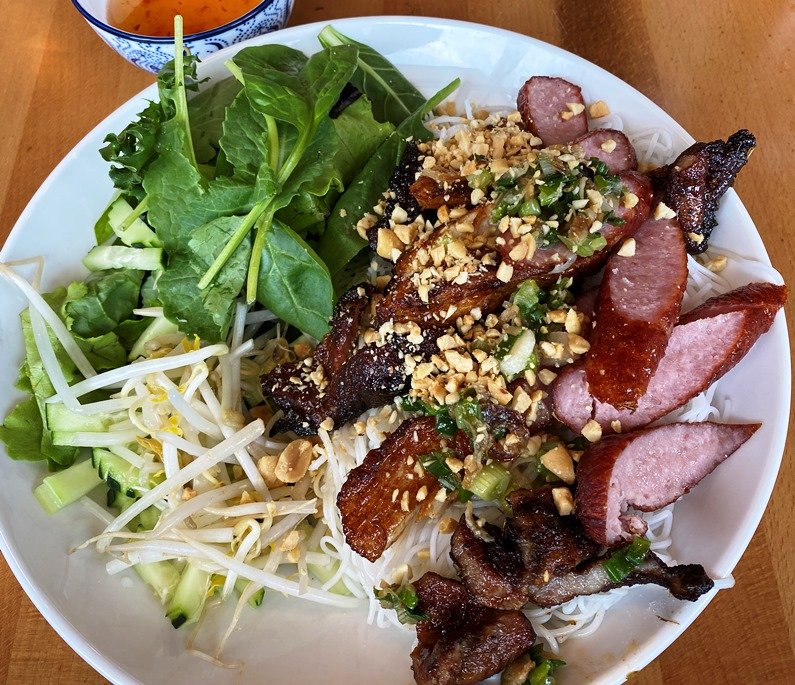 If you’re a fan of Vietnamese cuisine, there’s a new and tasty option now open in Raleigh! Midtown Pho, brought to you by the family behind Pho Far East on Capital Boulevard, has opened up their next location in a small plaza on Six Forks Road. Pho Far East has been one of the best Vietnamese restaurants in the area but its location on Capital Boulevard seemed just far enough away for me to NOT make the trip. So given the new, convenient location of Midtown Pho off of Wake Forest Road, I was curious to see what was going down here at their new restaurant.

If you’re headed to Midtown Pho via Wake Forest Road, you’ll have to wind your way through a crowded parking lot to get to the restaurant. Coming from Six Forks Road will be a bit easier because the location is clearly visible from the street! Stepping into Midtown Pho, you’ll immediately be struck by how modern and open the space is. A modern bar up front, lit up by chrome pendant lamps, sets the mood immediately. There are mostly four-tops in the dining area with stuffed bench seating around the perimeter. Colorful paper lamps and bamboo lighting fixtures hang overhead. And a huge chalkboard to the side welcomes guests and offers up some dining specials.

Get seated by the hostess and it’s time to scan the deliciousness on the menu. Midtown Pho has a pretty standard Vietnamese menu that has a couple of twists in the appetizer area. Beyond the standard summer rolls and spring rolls, Midtown Pho offers up banh xeo (Vietnamese pancake), soft-shell crab, and coconut shrimp. A bit of a mix here! But what I do recommend is starting off with a Vietnamese coffee. Midtown Pho serves them up without the drip filter so you just stir and enjoy! I’m a sucker for Vietnamese summer rolls, it’s a must-order for me and Midtown Pho does an excellent job with plump shrimp, sliced pork, basil, and more. The roll is tightly wrapped and well-sized with a scallion peeping out at the end! Their peanut sauce is pretty dark and intense compared to others I have tried. Overall a great example of the classic Vietnamese summer roll.

For mains, I’ve done the special banh mi and combo vermicelli bowl. Again, there are some small twists in the items here. The special banh mi is a monster of a sandwich. Crisp but soft roll stuffed with grilled pork, sausage, and topped with a fried egg. With pickled daikon, carrot, cucumber, cilantro, and daikon, you get a burst of flavor in every bite. The combo bun (vermicelli) is also solid but served up a bit differently in a flatter, wider bowl. One thing I definitely noticed is that Pho Far East grills their pork heavily resulting in excellent caramelization but sometimes drying the meat out a bit, your mileage may vary here. But this combo bun bowl is super satisfying and filling.

On the pho side of the menu, it’s all quite good. The broth is consomme-like and pretty clean with a bit of oil and flavor on top. All the condiments and toppings (onion, cilantro) are served in plentiful quantities with a good smattering of beef, brisket and meatballs. All in all, the combo pho at Midtown Pho is definitely above average with excellent flavor.

Service at Midtown Pho is very good, they up the game a bit here given the more elaborate surroundings and higher-end space. So count me happy to have Midtown Pho in Raleigh and another authentic Vietnamese option in the Oak City. The food here is the real deal upgraded a bit along with the service. While you’ll pay a bit more, you’ll also get a bit more at Midtown Pho but still end up with an affordable (for what you get) meal. I’ll be back to try more off their menu and see what their pho and Vietnamese pancake are all about, bon appetit!

Ideal’s Sandwich and Groceries in Durham – A Northern Take on the Classic Hoagie
Next Post:Coquette for French Flair and Excellent Service at North Hills, Raleigh