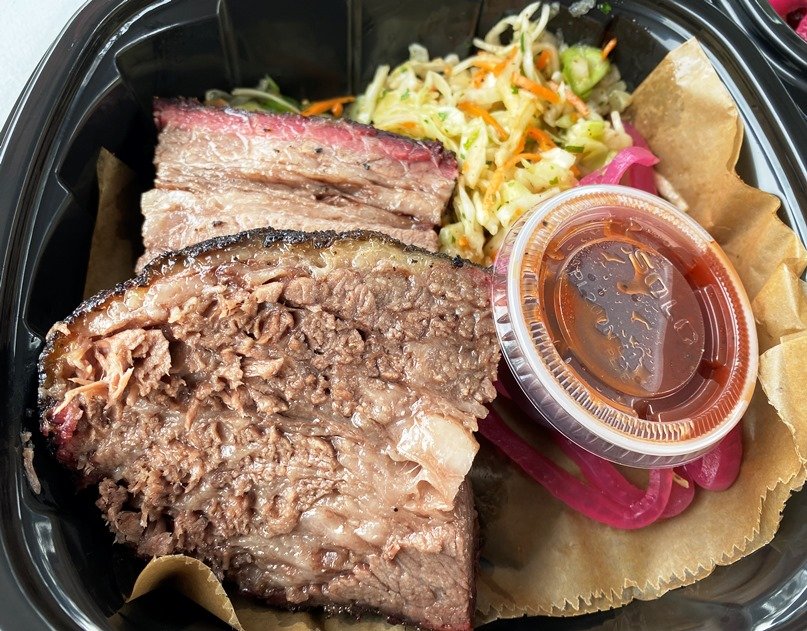 During the pandemic of 2020, it was a CRAZY year for restaurants and for those of us who love and support them. A tip of the hat to those restaurants that were brave enough to open up during the pandemic. I fondly remember when Lawrence Barbecue launched its pop-up over on West Street (Raleigh) in March of 2020. I was sheltering at home quite a bit so it was a welcome, culinary reprieve to grab some of their fantastic smoked meats for a meal. Fast forward a year later and Lawrence Barbecue has finally opened up their bricks and mortar in the new Boxyard RTP complex. Here’s what to expect from this up and coming, barbecue restaurant!

If you haven’t made it over to Boxyard RTP, be prepared for something new! This facility is made up of restored shipping containers that are typically used on massive shipping barges. I’ve seen something similar out in Albequerque New Mexico so it felt familiar to me. Decked out in a high-gloss navy paint, Lawrence Barbecue sits in the center of the action next to the dining area on the ground floor. The space is small with an open kitchen, storage area and merch display. What’s cool is that given the pandemic, you can order online or out front at the order window for convenience. Boxyard RTP has a large, open courtyard with covered seating in a community setting. There’s also seating up on the second level overlooking the courtyard.

The menu at Lawrence Barbecue should be pretty familiar with a short menu of smoked meats and Southern sides. Chef Jake Woods (previously worked at Seaboard 18) who runs and owns Lawrence Barbecue is pretty creative and tries a lot of different things for the menu, ranging from Kombucha marinated burnt ends to a chicken-fried rib patty over the past year. The chicken wing appetizer is a tasty starter, slicked with a bit of sweet and savory smoke. But yes, given the current wing shortage they may or may not be on the menu!

Lawrence Barbecue is also known for their over-stuffed sandwiches! Their brisket on toasted brioche is a mouthful and a half. Chopped brisket beef loaded onto a tallow-toasted bun and topped with slaw and barbeque sauce. Pair it up with their deviled egg potato salad and you’ll be a very happy camper.

But in the end, the mark of a good barbecue joint is always their meat, served up with a minimum of fuss. Lawrence Barbecue is doing a great job here, check out their sliced brisket (with beautiful smoke ring) served up with some Southern slaw and a side of BBQ sauce. The meat here is perfectly tender and loaded with luscious fat, making for an umami explosion in your mouth. The slaw provides a bit of tangy contrast to tame it all down.

The sticky ribs are another favorite here. Tender pork ribs slicked with a bit of sweet and totally lean. Paired with their Broccoli Caesar style (served cold with brioche croutons), you’re in for a taste sensation that’s relatively healthy? Or at least that’s what I tell myself to justify the meal! I have yet to try the pork barbeque at Lawrence Barbecue but will put it on the ToEat list for my next visit.

Overall, Lawrence Barbecue has transitioned from pop-up to store-front really well. Their three smokers in back show you that they mean business! And while the pandemic has slowed things down, they are already dishing out great smoked meats along with creative, fresh and tasty sides. I’m expecting more and better from them as they settle into their new space at Boxyard RTP. And as a bonus, they’ll be opening up the Lagoon, a leisure bar on the 2nd floor above Lawrence Barbecue soon. So if you’re in the RTP area, take a stop over at Lawrence Barbecue for a delicious lunch! I’m pretty sure you’ll be pleasantly surprised at the quality meats they are dishing out here…

Now Open: Boxyard RTP in Durham
Next Post:Kingfisher Bar in Durham: Fanciful Ambiance and Ground to Glass Cocktails Near DPAC