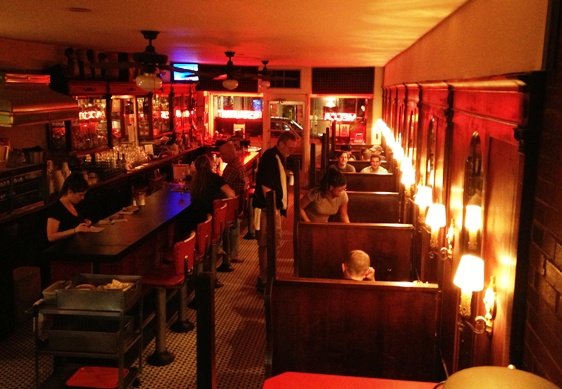 The Mecca in Raleigh for Old-School Diner Eats

(Re-opened in May of 2022) When you think of classic Raleigh restaurants, there are certain places that come immediately to mind:  Roast Grill, Angus Barn and of course, the Mecca.  It’s really hard to miss this place given it’s 20′ neon sign but for five years I did.  I’d poke my head inside and couldn’t figure out what the place was about.  And there would always seem to be something higher up on my ToEat list.  But finally, I had a reason to stop in and I have to say it was an enjoyable experience!  Not to say that the Mecca has amazing food or anything like that, but it’s like going back in time, just not nearly as cramped as the Roast Grill.

Inside, the Mecca is all about polished wood booths, a diner counter with liquor bottles in back, the place can probably fit 30 or so people at most.  You’re greeted as soon as you enter, it’s definitely a neighborhood spot that has got to have its regulars.  We grab a booth and work through the plastic covered menus.   Which doesn’t take long because the menu at the Mecca is pretty small, your usual diner classics like soup, salads, burgers, steak, some pasta and fried seafood.  I go with the broiled cheeseburger steak which comes with fries and a salad for about $8 which is really reasonable.

About 10 minutes later my meal comes out and whoops, I’m a little surprised!  My broiled cheeseburger steak is actually a ground sirloin patty with no bun, sniff.  With a slice of American cheese melted on top, it looked like a meal for a 12 year old but hey, it’s my first time here so I just didn’t know.  I watched my buddy dig into his thick, double-patty burger and let’s just say I was a little jealous but you know what?  I didn’t need the extra calories anyhow.  The steak itself was fine, lean, good flavor with a nice char taste, similar to what you might get at Char-Grill.  The fries were well-browned and a nice accompaniment.  My second visit was much better, I went with the standard cheeseburger which was well-grilled and a great deal for the price!  I learned from my earlier mistake…

Service-wise, the Mecca is excellent.  It’s a small place so you would expect it but that just adds to the diner feel by having old-school (not in age) waitresses with some flair.  They serve their soft drinks in small glasses so decent service is necessary to keep em filled.  All-in-all I do like the place.  As much as I don’t see myself coming here too often, it’s a great little diner for those of you who live in the hood or if you’re in downtown Raleigh on a fun night out.  Classic American eats at excellent prices with great service?  Well, there’s always a place for that in my book but I know my tastes run to more spicy and ethnic.  But I do appreciate the Mecca and what it’s about. A recent renovation added a large and beautiful dining room on the 2nd floor so even the Mecca is moving forward. They have got to be doing something right after 90+ years in business and it is definitely worth a visit for its classic feel and eats!

Cooking: Best Recipe for Detroit Style Pizza at Home!
Next Post:Hawkers Asian Street Fare in Chapel Hill for a Mind-Bending Taste of Asia