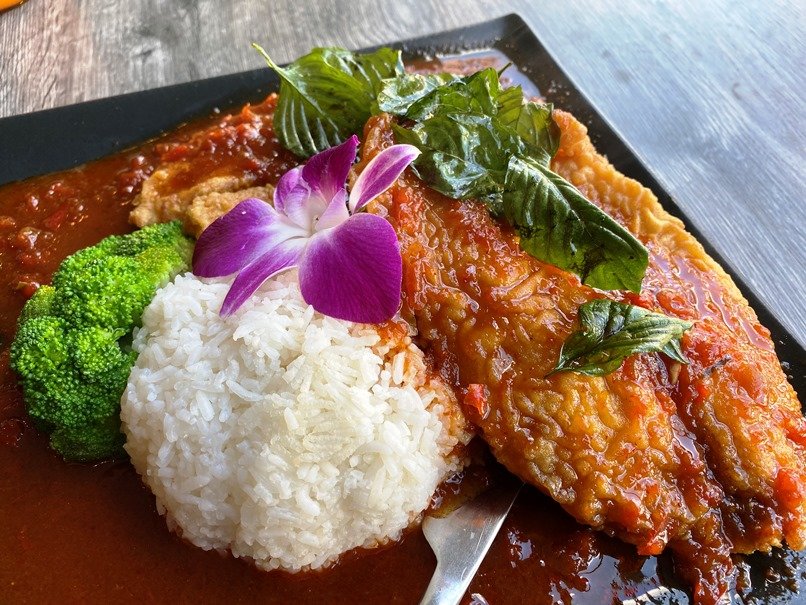 Thai at Main Street in Durham: A Fun Take on Flavorful Thai Cuisine

Over the past decade as the restaurant scene boomed in downtown Durham, it’s an area known for great farm to table Southern eats, beer and burgers. But what was conspicuously missing was really good ethnic food. Over the past two years or so, that gap has slowly been filled by restaurants such as Viceroy (Indian) and Goorsha (Ethiopian) on Main Street. And now you can add one more to the mix, Thai at Main Street! Located in the old Dames Chicken and Waffles space, Thai at Main Street opened in 2018 and I’ve been able to stop in for two dinner visits. So how are they doing so far? Not bad, with some room for improvement, read on for the details!

From out on Main Street, you’ll clearly see their sign hanging overhead, Inside the old Dame’s space has been opened up and there’s a slightly tropical feel to everything. Dark wood planked floors, thin wooden chairs along with some bright yellow and aquamarine on the walls as accents. If feels simple and humble which is reflected in Thai at Main Street’s menu and pricing.  Thai at Main Street’s menu covers the typical array of Thai cuisine such as larb, curries and noodles along with some house specialty dishes. Pretty much everything on the menu is under $20 and primarily in the under $15 range which is really reasonable for this convenient location in downtown Durham. And while I’m a pretty good home cook, Thai dishes always seem a bit complicated for me in terms of ingredients so I love going out and eating their flavor-packed offerings!

For starters, the larb is a great choice. Full of spicy and flavor, Thai at Main Street pairs minced pork with thin slices of red onion, peppers and I usually see this dish using chicken so this version is a bit different that what I’d usually get. But given pork is a white meat, it pairs pretty well with the flavors and spice of this dish. Like much of Thai cuisine, you get a mix of sweet, sour (squeeze of lime) and spicy along with a lot of color. Thumbs up here!

Another fun starter at Thai at Main Street is their street meat balls! Served on skewers, I believe Thai at Main Street is serving up the standard beef meat balls that you find in Asian cuisine and soups. The meat is spiced up with some sweet sauce and cucumber onion garnish which makes for a tasty bite. A bit of a surprise for me, I haven’t seen this on many other Thai menus over the years.

For the mains, the Massaman curry is a tasty treat. This mild curry uses a coconut-based broth, Massaman is an easy way to try the unique flavor profile of Thai cuisine which usually mixes in savory, sweet and sour.  Love the cashews served up with the chicken slices, there’s a lot of flavor going on here. But do note, that Thai at Main Street does slightly smaller portions which is reflected in their lower prices for lunch. I would describe the portion sizes as Thai-style vs. American-style.

Their chicken pad thai which is really a foundation dish for me in Thai cuisine was solid. Served with thin rice noodles, seared white chicken slices and a bit of egg, scallion and peanut garnish, it’s a tasty dish but not a stand-out for me. It seemed to be missing some of the tang and complexity that you usually get with tamarind in this dish. I also tried out a fried catfish with chili sauce which was a generous portion of firm, white fish in a crispy coating and topped with a slightly tangy, red sauce. The broccoli on the side was nicely steamed and the Thai basil on top is a nice touch!

Service at Thai at Main Street is solid and friendly, they will get you in and out quickly. They also run some regular drink specials so along with their decent menu prices, it’s a good meal in downtown Durham for a decent price. But the flavors and execution could be better so I’d put Thai at Main Street right down the middle for me in terms of Thai cuisine. But to be honest with you, there seems to be a dearth of good Thai restaurants in the Triangle so Thai at Main Street does a good job but could use some tweaks and improvements to be great.

Chido Taco in Raleigh: Serving Up Tacos and Mexican Deliciousness
Next Post:Travel: John’s Roast Pork in Philadelphia – A Mecca for Cheesesteaks and Roast Pork Sandwiches