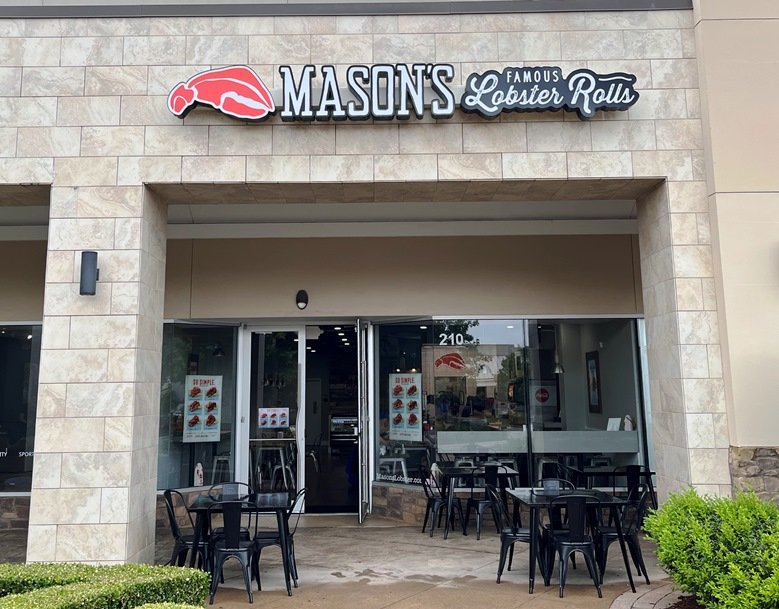 As a former, native New Englander, I can take my lobster rolls pretty seriously. And I certainly took them for granted when I lived up north. After living in San Francisco and then North Carolina over the past 20+ years, I came to realize that they were pretty much a regional delicacy given I rarely saw them served elsewhere. But time changes everything, thankfully! With Cousins Maine Lobster first opening up a food truck and then a stall at the Morgan Street Food Hall, some of my cravings were satiated. And now add one more lobster specialist to the mix, Mason’s Famous Lobster Rolls!

Located in the older area of North Hills near the Renaissance Hotel, Mason’s Famous Lobster Rolls (MFLR) sits in a narrow little space on a corner of a building. Lots of plate glass windows and sidewalk seating, it’s all counter order and pretty basic here! And the menu is pretty basic too, offering up a handful of classic New England seafood items: NE and CT lobster rolls (lobster dressed in either mayo or butter), bisque, chowder along with a handful of other sandwiches. Lobster rolls are offered in two sizes, the regular ($16) and Bar Harbor (meat of full lobster, $20). The lobster is flown in twice a week from Maine to make sure it’s as fresh as can be!

Over the course of two visits I’ve had a chance to try the loaded Bar Harbor lobster roll, Connecticut-style, lobster bisque and lobster cheese sandwich. The CT style lobster is luscious, rich lobster covered in clarified butter on a toasted side-split hot dog bun. It’s a classic take on a lobster roll and worth the calories! The warm buttery, bun plays off nicely against the lobster. Highly recommend their ooey, gooey cheese sandwich stuffed with lobster pieces and dipping it into some lovely lobster bisque. You can even order lobster on top of your bisque for some extra flava!

Service at Mason’s has been decent but given the counter service, it’s not that complicated. All in all I do like Mason’s Famous Lobster Rolls and their seafood here. The lobster here is certainly pretty fresh and what they’re doing is right on par with what you might find up in New England. But let’s face it, the small menu means you really have to be craving lobster to come here. And with a concept similar to Cousins Maine Lobster, you’ve now got another good option to get your lobby on!

Travel: John’s Roast Pork in Philadelphia – A Mecca for Cheesesteaks and Roast Pork Sandwiches
Next Post:Wegmans in Raleigh, A Culinary Delight for Groceries and Convenient Eats