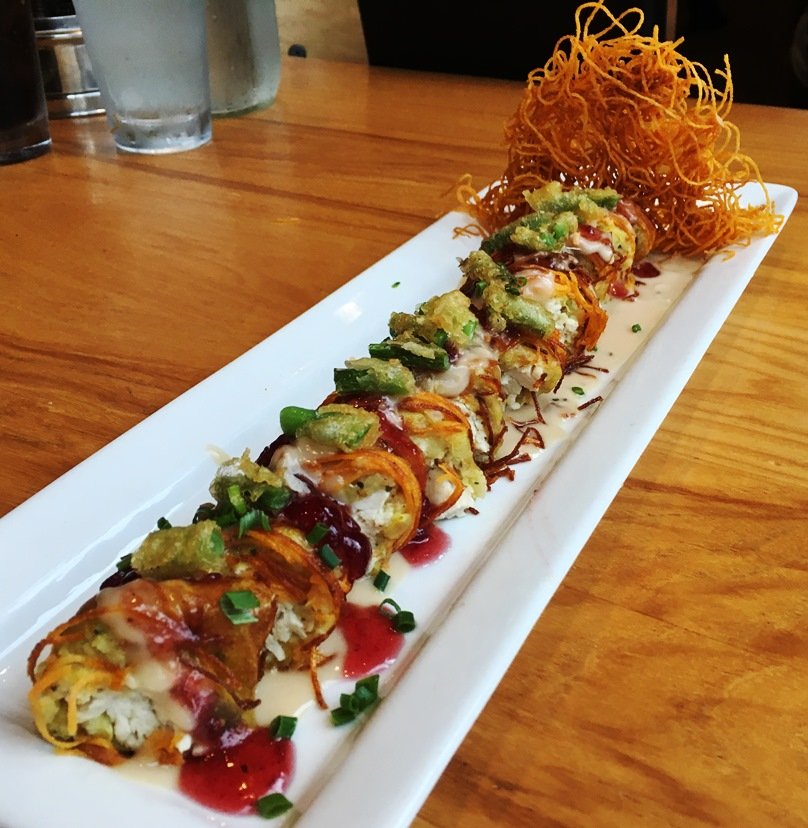 Now I like to think that I’m pretty picky about where I eat and when I heard that the uber-popular Cowfish Sushi was coming to Raleigh, I wasn’t sure what to really think.  I’m not a fan of mixed ethnic eateries because I think they cater to the lowest common denominator, choosing a broad menu over a great meal and experience.  Japanese-Korean, Thai-Japanese, whatever, I sorta scrunch up my nose at that concept.  And with Cowfish Sushi trying to fuse the all-American burger with Japanese sushi?  I’ll have to say I was far from convinced.  There’s a saying that when you try to please everybody, you please nobody which was in the back of my head.  Add in that my first attempt to eat at Cowfish Sushi resulted in a 90 minute wait on a Saturday at 5:10 pm and it meant they had an uphill climb.  I only had to wait 40 minutes for Cochon in New Orleans which is a nationally renown restaurant so yeah, I was scratching my head.  Long set-up here, but I finally made it into Cowfish on a Sunday evening at 8:30pm and here’s how it all went down!

A group of 10 of us strolled in a bit after 8pm on a Sunday evening and it was pretty empty, a shocker to me!  We got seated quickly in their covered patio area which was fine on a temperate evening.  First thing you’ll notice about the Cowfish interior is the modern black and crimson red decor.  Sharp and striking, the centerpiece fish tank is really impressive along with all the faux Japanese prints and decor poking fun at the cows and Japanese pop culture. Definitely a place where your kids will be kept entertained and amused at the dinner table.  We had one young server covering our table of ten and she seemed very well-trained, they must do a serious volume business here.  Unfortunately we don’t do apps given some earlier snacks at Sparians but just be warned that the Cowfish menu is very long and deep with tons of options for starters.  I go with the Brento box which is a mini-burger, four pieces of a specialty roll along with some sides.  The crowd here at Cowfish was mostly young professionals, no surprise for this neighborhood and I’d have to guess that earlier in the evening it’s more of a mix of families.

Before the entrees come out we get a surprise from the manager who brings over several complimentary sushi plates for the table.  I’d have to guess he realized we were a table full of Yelp reviewers which sometimes happens.  As the entrees start coming out, it’s visually impressive. Big plates full of food and interesting presentation makes for a spectacle.  My brento box comes with some steamed edamame, sweet potato fries and spicy cucumber slices along with the sushi and mini Texas Longhorn burger.  I start with the sides, the edamame is decent but lacks a bit of salt, the cucumber slices are nicely done with some spiciness but the stand-out side is the sweet potato fries!  Crisp exterior, sweet interior with just the right sprinkling of kosher salt, yum!  My burger with cheddar, BBQ sauce and onion strings is decent and comes on top of a sweet bun (I think  Hawaiian sweet roll).  Nicely grilled with some meaty heft for a burger.  My firecracker roll was stuffed with tempura and topped with yellow tail/salmon.  Thick pieces that held up fine, the ponzu sauce it was served with was pretty salty unfortunately…

Service through the meal was team-based and spotty from time to time, even though the staff is eager to please and responsive.  I’ll chalk that one up to the party size!  And we all left full and happy, not a bad deal for my $17 bento box!  So what’s the final call? In the end, I’m still not a big fan of these mixed-concept type restaurants.  They’re really designed for a suburban diner who wants quantity and distractions versus a more sophisticated and subdued meal.  BUT if I did have kids, sure I’d come to Cowfish Sushi and Burger to enjoy their quirky decor and large portions.  Most of the flavors and presentation of our meal were on point if not authentic and the staff was definitely trying hard.  So while Cowfish Sushi and Burger Bar may not be my favorite type of place, there’s a high likelihood you’ll still like it!  Let’s just call it the Cheesecake Factory done Japanese style.  Which is totally ok from time to time as long as I don’t have to wait 90 minutes.  So best of luck to you, Cowfish Sushi and Burger Bar!  I’m pretty sure you’re going to do great in Raleigh…