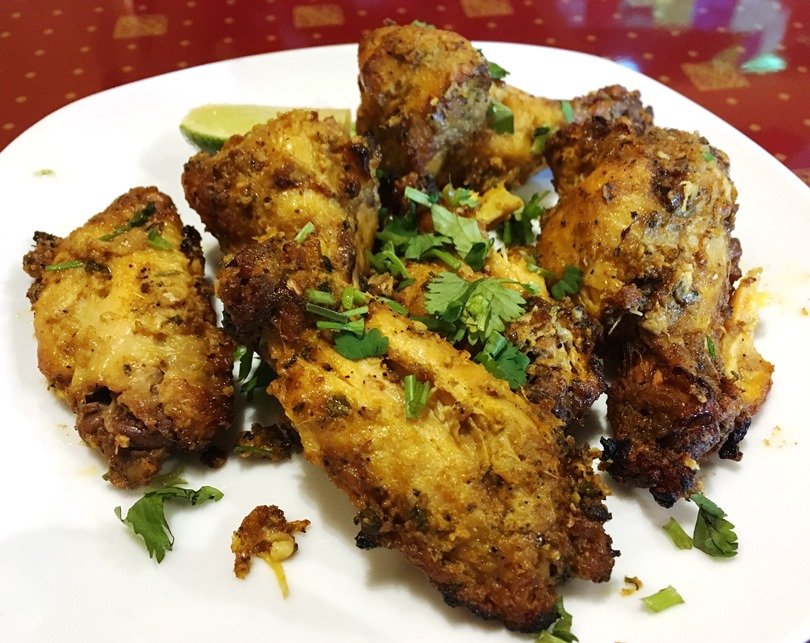 Over the years of living in the Triangle, I’ve learned that if you really want good, down-home ethnic eats, you’ll find a lot of it in Cary and Morrisville. From Chinese to Indian, Mexican and more, there always seems to be a plethora of good, inexpensive, family-run eateries in these two cities. And one of the more common categories of cuisine you’ll find in Cary is Nepalese! Given its location on the planet, the mix of Indian, Nepali and Indo-Chinese fare makes Nepalese food a favorite in my book. I decided to check out a newer Nepalese spot recently, Everest Nepali Kitchen out in Cary and here’s what YOU can expect!

For starters, consider the onion bhaji! Strips of tender onion deep-fried, similar to an onion ring. Served with some chutney sauce, the onion bhaji at Everest Nepali Kitchen is tasty and crunchy but my plate was a bit over-fried. Another great option for an appetizer is their tandoori wings. A small order of six plump wings show up bathed in a yellow marinade and showing off some charred bits. The wings are full of garlic and ginger flavor on top of super-tender, fall off the bone chicken that tandoor meats are known for. A thumbs up here from me, tandoori wings can be hard to find on many menus in the area. Everest Nepali Kitchen will also customize the spiciness/heat level of your food on a scale of 1 to 10. I went with the middle (5) for my visits which was perfect.

For the main entrees, I’ve gone with the chicken korma twice!  A large, silver-plated bowl of simmered chicken in a yogurt tomato sauce loaded with raisins and more. Korma is a super, flavorful dish and seems to be nearly as popular as chicken tikka masala of late. I’ve found the entree sauces at Everest Nepali Kitchen to be a bit deeper and stronger then my usual Nepalese favorite, Himalayan Range Nepali. Also the portion sizes at Everest Nepali Kitchen are LARGE. From the entree itself to the biryani rice served on the side, you get a lot of food for the money here. And one of my bigger barometers for Nepalese food is the breads. Everest Nepali Kitchen offers a large assortment of naan, kulcha, poori and more. Their garlic naan was decent but a bit bready and doughy, a good and decent effort but less then top-notch.

I can say for sure that Everest Nepali Kitchen is doing a great job with its Nepali menu. There’s plenty of great menu choices with solid flavor, large portion sizes and good prices. But I’d still have to put Everest Nepali Kitchen a notch below Himalayan Range Nepali right now. For the sauce based dishes I might give Everest Nepali Kitchen an edge but in other areas of the menu, not so much. In the end, it’s still an excellent choice for Nepali cuisine. And given the competition it really has to be! Can’t wait to try the other Nepali restaurants to compare (Kathmandu Kitchen, Himalyan Nepali) but kudos to Everest Nepali Kitchen for offering a great dining option to those looking for Indian and Chinese flavors in their eats.

Redneck BBQ Lab in Benson, a Destination for Smoked Meat Lovers
Next Post:Media: M Pocha Offers Up Some Culinary Magic for Durham