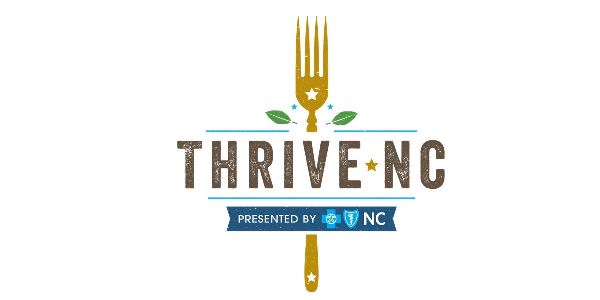 News: Thrive NC Food Festival Returns to Raleigh on May 9 and 10!

(Currently raffling off two tickets to Thrive NC, May 10! Check out my social handles on Facebook and Instagram for details!)

When it comes to food festivals, I’m a big fan! Sampling delicious eats from a variety of local restaurants is always a fun day in my book. And I’d have to say that Thrive NC is one of my favorites after its inaugural run in 2018. Sponsored by Blue Cross/Blue Shield of North Carolina and supporting six local charities, Thrive NC is focused on resolving food insecurity in the state. Almost 1 in 5 children in North Carolina regularly deal with hunger and more then 600,000 households don’t have enough to eat.

NC Triangle Dining was invited to a kick-off event at the Transfer Co. Food Hall where we listened to all the details about the upcoming Thrive NC festival from Reagan Greene Pruitt (BCBS of NC), Earline Middleton (Food Bank of Central and Eastern NC) along with Nick Neptune and Joe Kwon representing Transfer Co. Food Hall. Over three days, Thrive NC will host a summit around food insecurity, a day of service along with two days of the public food festival, very cool. Tickets have already sold out for the 2019 Thrive NC food festival and all proceeds will benefit: Conetoe Family Life Center, Food Bank of CENC, NC Future Farmers of America, Alliance Medical Ministry, Band Together and Meals on Wheels Wake County. Get all the details on the main Thrive NC website!

In addition to doing all this great community work, Thrive NC will also showcase some of the best restaurants in the area, along with some of the best chefs, breweries and distilleries to sample from. For entertainment, Thrive NC will have cooking demos at Market Hall along with live music on an outdoors stage. It’s all a ton of fun and food at City Market for a great cause! Last year’s event enjoyed some perfect weather making for an amazing two evenings. Check out the lineups below for the demo stage and participating restaurants!

So hope to see you at City Market Hall on May 9 and 10 for an evening of fantastic food and serving a great cause, abolishing food insecurity in North Carolina! I’ll be raffling a couple of tickets to this sold out event in the next couple of weeks on my social channels, don’t miss out!

Vivian Howard and Ashley Christensen have announced their star-studded chef demo lineup for May 9 and 10 at Thrive NC presented by Blue Cross NC at City Market in Downtown Raleigh.

Curry in a Hurry

Media: Fantastic Asian-Fusion Fare and Decor at the new CO in Raleigh!
Next Post:Redneck BBQ Lab in Benson, a Destination for Smoked Meat Lovers