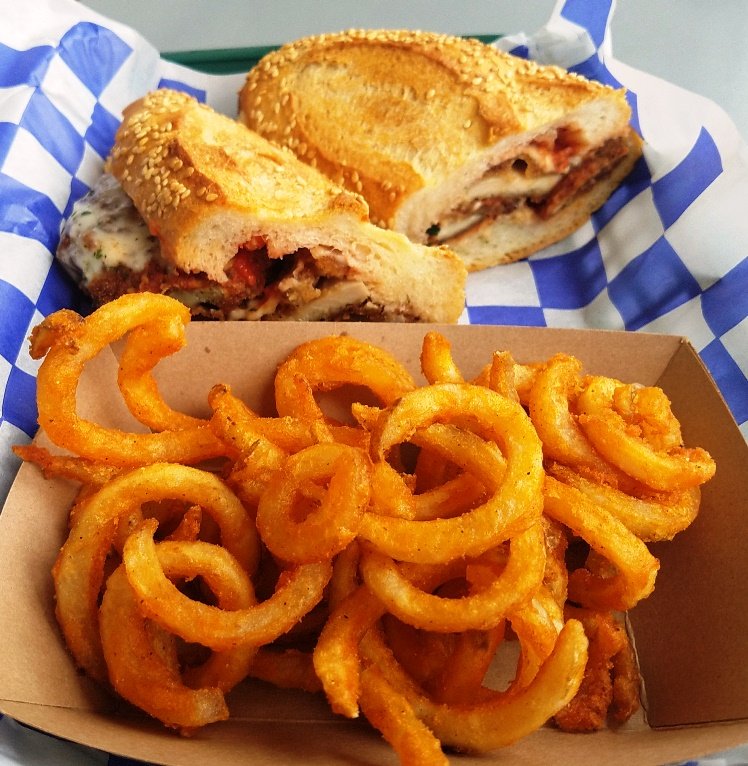 When it comes to sandwiches, what comes to your mind? Couple of slices of bread, some protein in the middle, maybe some cheese. It just doesn’t sound very exciting, does it? But thankfully we’ve got a new sandwich shop in town, Eastcut Sandwich shop in Durham. Located in the same building as the short-lived, Finch’s Durham, Eastcut Sandwich shop is a modern and hip take on a traditional up North sandwich shop. And it also adds a bit of gourmet surprise to the mix. After two visits to Eastcut I’ve got a pretty good feel for what they’re doing, most of which is good but there is some room for improvement!

Heading over to Eastcut Sandwich shop, you may be surprised at its location. Sitting in what seems to be a mostly residential neighborhood, you’ll quickly spy a narrow driveway leading to Eastcut’s parking lot and building. While the lot in front has limited spaces, there’s plenty of room in back for your vehicle! Head on over to the building and you’ll find a large wrap-around patio but the side doors are not usable as an entrance. Enter up front and you’ll find yourself in the main dining room which has a bit of a Western feel with the knotted pine floor planks and wood slat separator. Eastcut is counter order, table service and the line forms to the left!

The menu at Eastcut Sandwich bar is focused on guess what?! You got it, hearty sandwiches either cold or hot along with some salads and burgers. What’s nice is that at Eastcut you can also grab a beer, cocktail or adult slushie with your meal so they’re trying to traverse the lunch and dinner periods with some alcoholic bevvies. There’s also a daily specials board and it looks like they like to get a bit creative here. Sandwiches are sold bare here on round buns or hero rolls. You’ll have to add a side (curly fries, sweet potato tots, salad, potato salad) to make it a meal. With most sandwiches between $6 to $15, you can eat pretty affordably here! Eastcut Sandwich Bar also has an after dark and brunch menu for Sundays which I have yet to try.

Given that I’m not much of a cold sandwich fan, my eyes settle on the chicken parm and cheesesteak offerings. But after a mental coin-flip, chicken parmigiana it is! Eastcut does a very nice chicken parmigiana sandwich which is served up on a beautiful but smallish, seeded roll. The chicken cutlet is very well browned and nicely assembled with great cheese and sauce coverage. It’s a delicious sammich but let’s face it, it’s hard to go wrong with chicken parm. On a second visit I get to try their chicken alla vodka sandwich on special. It’s similar to a chicken parm but goes with a creamier alla vodka sauce, ham and smoked gouda on top. It’s a hit for me, albeit a bit messy! And I actually like the form factor of the Eastcut sandwich on a standard roll vs. a sub roll, you seem to get a bit more with the smaller roll.

While the overall menu is pretty standard for sandwiches, one thing I noticed is Eastcut Sandwich Bar’s creativity around the specials. The peanut satay wings I tried on special were a very unique rendition of a Thai-style wing with lots of rich, peanut-ty flavor. Cooked confit style (double cooked in oil, once at lower temp and then finished in hotter oil), the wings at Eastcut fall off the bone with a lot of tender chicken meat. This confit preparation takes a bit of work and isn’t something I’ve seen a lot of in the area, so kudos to Eastcut Sandwich Bar for the effort.

Service at Eastcut Sandwich Bar is solid but they are definitely training up their staff so be patient. There’s a new covered patio which has recently opened up so the owners here have some ambition with the seating! Overall I think you’ll be pleased by the sandwiches at Eastcut Sandwich Bar. They’re prepared with attention and a bit of creativity although the final results are a bit inconsistent. But given how recently they’ve opened, I’m hoping that Eastcut Sandwich Bar will get settled in across all aspects of its service and menu. Either way, if you live in the hood, don’t miss out on this little gem and that great patio. With a delicious sandwich and beer in hand, I can’t imagine you wouldn’t be happy and pleased…