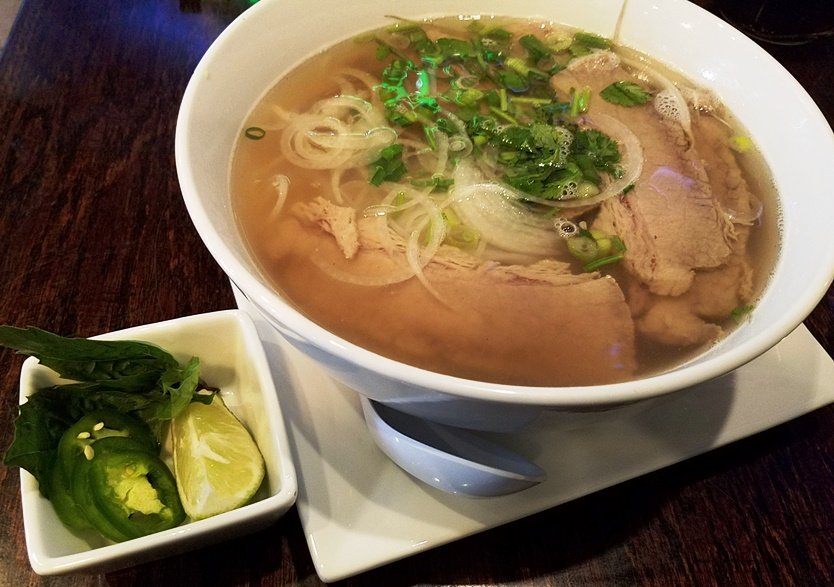 Over on Glenwood South, a neighborhood better know for beer and dance clubs, we’ve seen a surge in new Asian eateries over the past couple of years! From Pho Pho Pho to Seoul 116 and now Anise Pho! Brought to you by restauranteur John Tang (owner of Sushi O), Anise Pho was moved from North Raleigh to a restaurant spot that used to be China O. And after a couple of visits, I can say that this eatery is doing a lot of things right for Vietnamese food fans!

Located right next to popular sister restaurant, Sushi O, Anise Pho sits in a convenient spot underneath the 222 Glenwood condos. Just mind the street parking on Glenwood, you may have to feed a meter unless you park on a side street. Inside Anise Pho, you’ll find a lovely centerpiece bar with a bamboo overlay and glow lighting underneath. The smallish dining room wraps around the bar so it’s a slightly cozy space. I grab a menu and start poking around excitedly. Anise Pho offers up your traditional Vietnamese classic in a shortened menu. It’s a functional menu with lots of picture but doesn’t have a ton of details if you’re not familiar with Vietnamese food. You’ll find summer rolls, noodles (bun), rice (com) and of course the ubiquitous soup (pho) available at Anise Pho. The lunch specials at Anise Pho are $9.99 for a pho and soft drink.

I’ve had a chance to dine at Anise Pho several times and have had a chance to get the menu pretty well I go with my fave order of summer rolls (grilled beef) along with a brisket pho! The summer rolls at Anise Pho are delicious and huge! A wonderful Vietnamese starter, summer rolls are served cold and consist of rice noodles, lettuce, basil, mint, shredded carrots along with a protein (often pork or shrimp). Anise Pho spins things up a bit by offering grilled beef with their summer rolls and it’s fantastic. The beef really stands out and these rolls are very substantial, probably best shared. The peanut dipping sauce offered with the rolls is also very well done and served in a generous portion.

But of course, how can you got to Anise Pho without trying their namesake dish? The lunch bowl of pho is a large bowl of broth, noodles and meat. A smattering of thin-cut onions and scallions sit on top, completing the dish. I always recommend trying out the pho broth before adding any condiments (jalapeno, lime, thai basil) and the broth at Anise Pho is good. A bit lighter but with the proper essence of cinnamon, anise and other spices that pho is known for. The brisket are nice thick cuts of beef with fat cap on top, a good pho for someone’s who’s trying it for the first time. Other options include beef shank, meatballs and tendons which might be a bit much for a first-timer. With the weather turning colder, I can definitely see myself coming back here, soon.

In some additional visits I get to try out their grilled pork rice plate (com) which is served with a bowl for warm broth, a nice touch. It’s a decent meal but flavored and spiced a bit differently then I’m used to but still tasty. The pork banh mi is perfectly toasted and served on a soft, white hoagie roll. It’s stuffed with a decent amount of pork, shredded carrot, cucumber and jalapeno, a very good sandwich.

Anise Pho offers up full table service and don’t forget about that great sidewalk patio! From a service perspective, they do a nice job here, the staff seems really well trained. So when everything is said and done, I”m really happy with Anise Pho. Didn’t have much expectations but I think they offer a more authentic Vietnamese cuisine experience than any other options ITB Raleigh. Not quite as good as say, Mekong in Morrisville but above average. Which is much appreciated because sometimes you just have to have some summer rolls and pho to satisfy your cravings! And Anise Pho delivers great Vietnamese food right here in downtown Raleigh.

The Alamo Drafthouse in Raleigh, an Unforgettable, Deluxe Movie Experience
Next Post:Best New Restaurants, Food and Drink in the Triangle, 2018 Edition