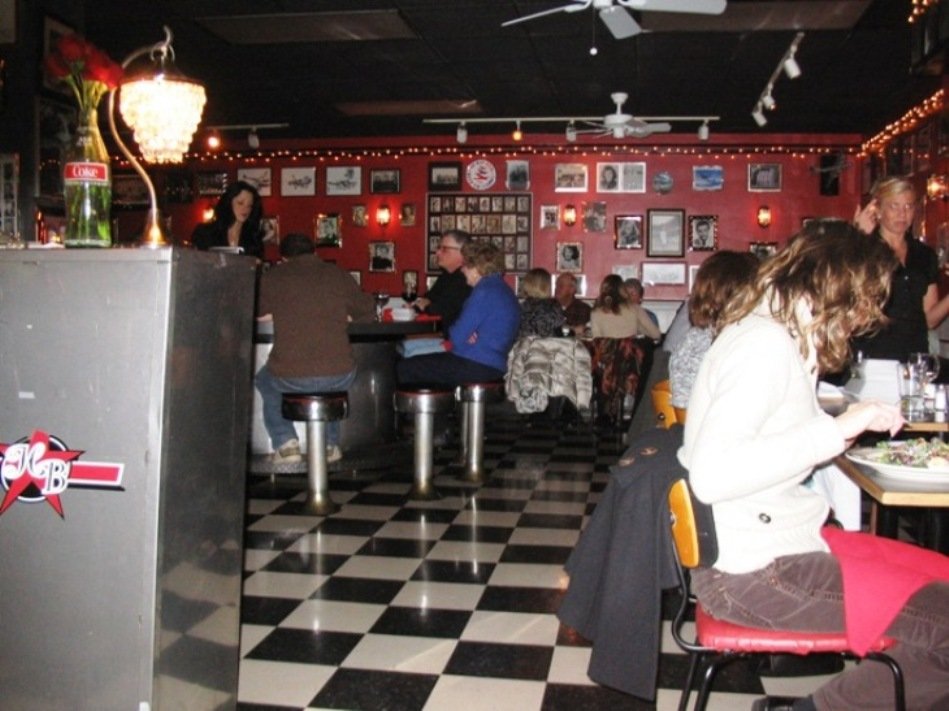 Oh yeah, it’s been a while since I’ve ventured back to Hayes Barton Cafe.  This classic Raleigh eatery is known for it’s huge portions and rich food which is a blast the first time you visit. It’s been a year since my last visit and I started scratching my head, why?  Lack of money, fear of excessive calories and the Five Point parking situation meant that this place had slipped off my radar screen.  But eventually my little, prehistoric brain starts to crave cake and the culinary excess that is Hayes Barton Cafe so I set up a dinner party as an excuse for a return visit.  The big question I had was if Hayes Barton Cafe was as good as I remembered it?

Dinner was set for 6pm, right when the place opened and by 5:50 there were 10+ people in line.  Wow, so I guess the whole reservations thing hasn’t changed for Hayes Barton Cafe!  At 6pm the doors were promptly opened and we streamed in with a quick drive-by on the delectable dessert case.  I sat in my usual corner round table and surveyed the scene.  By 6:30pm the place was filled with Raleigh locals and people in the know, the place was buzzing.  My table of five was running a bit late but eventually they all showed up as did the server.  I put in an order for the crab dip with bagel pieces and it was what I remembered.  Lush, cheesy with large, buttered and grilled bagel chunks, whoa.  Oh-so-cholesterol-be-damned good!  Given I was with Hayes Barton Cafe newbies I dispensed as much wisdom as I could (uhm, you probably don’t want to do a soup or salad).  Orders went around for the chicken-waffles, chicken pot-pie along with a pasta dish.  I jumped in on the Dial M for Meatloaf which I had never tried before.

Fifteen minutes later our meals show up.  The potpie looks as wonderful as ever but the meatloaf?  Yeah, I nearly fell out of my chair looking at that bad-boy.  Looks like they cooked it up in a 12″ cake pan and served it up in thirds.  My mighty meatloaf must have been at least 9″ long, 2″ across and a inch and a half deep.  In this case, size really did matter so I took a deep breath and dived in.  Thick, firm texture, lovely onion gravy, a pile of mashies along with some complimentary green beans to “balance” out the meal. It was quite the comfort food meal but yeah, I barely put a dent into it, pushing the plate about halfway through.  You know Hayes Barton Cafe is all about the dessert so bring on the next course!

Our waitress stopped by with detailed descriptions of the cakes for the day.  I went with the tried-and-true Hayes Barton Cafe coconut cake.  My friends spun up a chocolate mocha and one other flavor.  The slices come out and get dropped on the table, whoa!  They are as big as ever with density, moistness and flavor.  My coconut slice is decent but not quite as good as I remember, the mocha chocolate was my favorite.  When all is said and done, five of us picking on three slices finish maybe half of our cake.  But that’s how they roll at Hayes Barton Cafe.  Serious portions, serious desserts and great service.  While the experience wasn’t as magical as my first several visits, Hayes Barton Cafe hasn’t lost much.  Cool vintage decor, great service and humongous servings of comfort food.  And yeah, throw in that old-school Raleigh feel and this place is still a destination dining spot.  And the line out front at 5:50pm?  That’s all I need as proof, bon appetit!

Photos: G.58 Cuisine in Morrisville for Upscale Chinese Cuisine
Next Post:Feel like a Kid Again (or Bring your Kids) at Pullen Park in Raleigh!