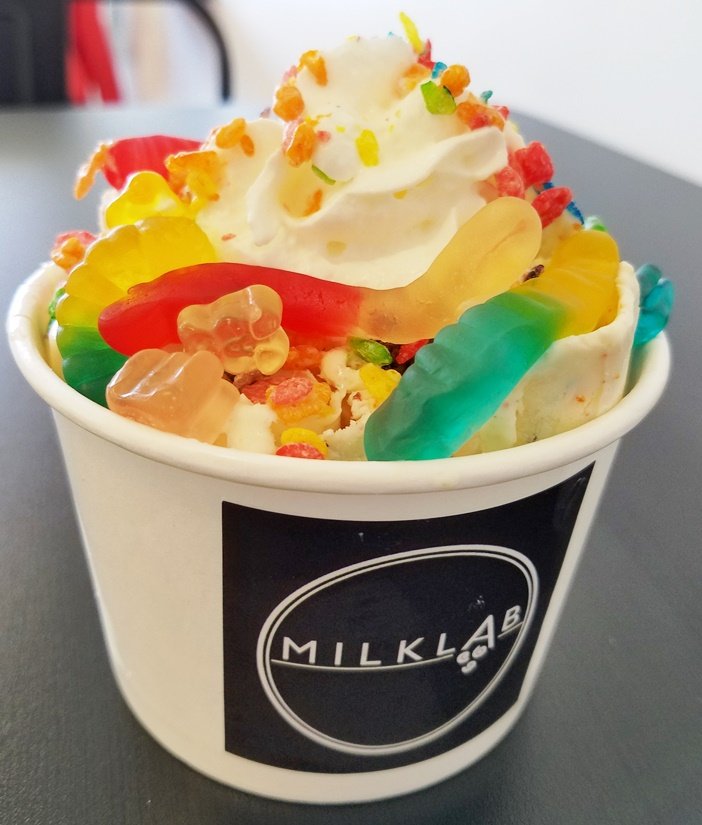 First Take: Milk Lab Cafe in Cary for Ice Cream Rolls Made Right in Front of You!

If you’re a fan of frozen treats and ice cream, you may have heard about Thai ice cream rolls. I had run into a Youtube video online a couple of years ago and ice cream rolls puts a spin on the ice cream making process! Instead of churning cream, sugar and toppings over some hours and then freezing the mixture, cream is poured directly on a freezing surface and prepared right in front of you. Well guess what, we’ve finally got some options for Thai ice cream rolls in the Triangle, people! One of the newest places offering ice cream rolls is Milk Lab Cafe in Cary (Opened on 12/8). And I had a chance to see what the deal is all about with this upcoming ice cream craze…

Head on over to a small plaza over at Tryon/SE Cary Parkway and you’ll find the Milk Lab Cafe in the far corner, far away from both streets. It’s a spartan little spot decked out in white, blacks and woods with modest seating near the front window and a handful of small 4-tops. A chalkboard menu up front shows off 12 ice cream flavors along with an assortment of toppings for $6.47 each. (I’m guessing it rounds up to $7 with taxes!) In addition to ice cream rolls, there’s also milk teas with boba on the menu, very Asian!

I’m a bit unsure what to order given I’m a ice cream roll virgin and all the flavor combos sound pretty good. Campfire Delight, a smores spin, sounds wonderful along with Monkey Business (nutella, banana). But my eyes settle onto Unicorn Poop, I mean who can resist that name? Fruity pebbles? Caramel and honey? Count me in! So I send in my order and you can choose your toppings after your rolls are made.

The Milk Lab Cafe has two ice cream prep surfaces but they’re not too busy today so only one is being run by a young guy in black. Cream is poured on top and spread across the freezing surface along with a cup of fruity pebbles. Choppity-chop-chop-chop, he quickly smashes up the cereal and scrapes up the ice cream mixture across the surface again. Honey and caramel are drizzled on top with squeeze bottles and the process repeats itself. In a couple of minutes, the mixture has frozen pretty solid and he scrapes the mixture off into six separate rolls. They’re placed in a cup where you can finally add unlimited (well, limited by the size of the cup!) toppings to your frozen treat.

The unicorn poop ice cream rolls are speckled with bit of fruity pebbles giving it its name. For my toppings, I decide to go with gaudy and ask for more fruity pebbles and gummi worms. With a little whipped cream on top, my ice cream rolls makes for super colorful sundae! The ice cream rolls are very light and easy on the tongue. And while I do like the colors in my Unicorn Poop rolls, the gummi worms get pretty hard and chewy with the cold, so I’d pass on them in the future. Overall it’s a tasty cup and a nice little snack for the afternoon.

So what can I say but Thai ice cream rolls are a lot of fun to watch being made. The ice cream itself is ok but I’ll have to come back to try some different flavors. But If you’re in the area and have some kids, it’s a fun way to do ice cream as a performance. Just understand it takes some time for these rolls so you may be eating your cream on a staggered schedule. But very cool, Milk Lab Cafe! Thanks for bringing a different take to ice cream to the Triangle and I’m looking forward to cup #2…

Fab Five Recommendations for Food Photography
Next Post:Waffle House for Heart-Warming Southern Eats at all Hours