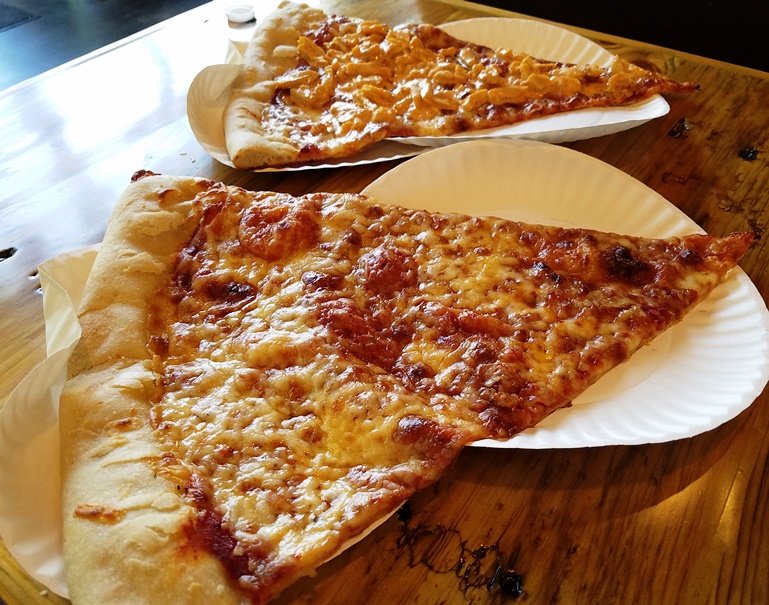 Ahh, pizza! I don’t know about you but I can never get enough and I’m always looking for my next slice.  And in my pizza nirvana, I’ve got pizza goals. One of them is to eat one of those super large slices that I’ve seen in pictures from Washington, DC. Known as the super-slice, they’re usually as big as your head which sounds like perfection to me. So I was excited to hear about Benny Capitale’s. Part of a 16 restaurant chain of pizzerias specializing in the super-slice, they were coming to Raleigh in the summer of 2017 after opening locations in Charlotte and Chapel Hill. And I’m happy to say, they’re here and dishing out huge slices of pizza as advertised!

Located in the old space that used to house Crema, you can find Benny Capitale’s behind some bright pane glass windows looking out on Fayetteville Street. Inside, the space is casual and built for serious pizza volume and business. A handful of vinyl covered booths and single diner stool seating around the edges. It’s a bit spartan but given the “by the slice” model, I’d expect a good chunk of Benny Capitale’s business to be take-out, walk out or in this case “Imma gonna eat this slice right now” standing! Note that Benny Capitale’s will be open until 3am on Friday and Saturday nights for the weekend crowd.

Chatting with the manager, he tells me a bit about the history of the chain and shows off a super-slice to me. The menu is super-simple at Benny Capitale’s. Three standard slices along with a couple of monthly specials. Cheese is $4, everything else $5 and canned drinks at $1. Benny Capitale’s is still working on their ABC license right now but I’m looking forward to pizza and beer in bottle/cans in the future. Full 28″ pies go for $30 and with one topping for $38. I can’t imagine trying to get that pizza box in my Mazda, I’m guessing I’d have to tie it up on my roof to get it home safely! Note, there is a Benny’s pizza challenge. Eat the whole 28″ pizza in under an hour and you can win $500…

We order up a couple of slices since we’re headed off for some beers at Trophy. My cheese slice is perfectly browned and served up on two plates, woo-hoo! It’s pretty darn big but only slightly larger than the slices at Randy’s Pizza RTP in my opinion. I take a bite and yes, this is some good NY thin-slice. The sauce is tangy with some seasonings, great cheese coverage and the crust is interesting. It is a thin-crust and holds up well to the topping but it seems to have some flakiness to it. A bit different than what I’m used to. But it’s tasty and impressive, I’ll just HAVE to come back and do some more taste-testing, eh? Overall I’m really happy with having Benny Capitale’s downtown. They’re doing a solid slice of pizza here for the lunch and late-night crowd and hey, if it happens to be bigger than your head, it’s only even better!