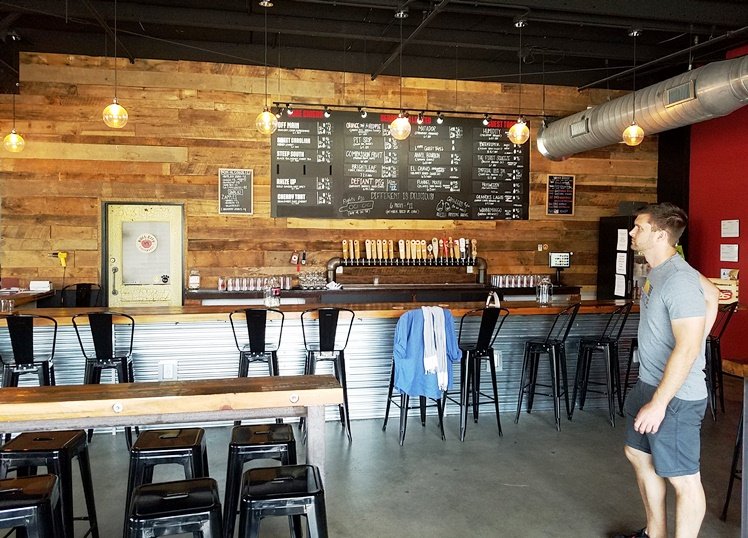 An Alternative to Beer at the New Bull City Ciderworks

With all the craft breweries popping up in the Triangle you knew that there would be other libations that would start manufacture in the state.  Liquors from TOPO, Mystic Liquer and Krupnikas for example. But how about a nice adult beverage without the grains or gluten? And that’s what you get at the new Bull City Ciderworks in Durham? Here’s how my visit went to their new location on Roxboro Street…

The popular Bull City Ciderworks started on Elizabeth Street in Durham but due to some city construction, had to find a newer and bigger home. Supported by a local Kickstarter, they’ve done really well, moving into a prime location near the DPAC. It’s a great space, at least twice the size of the original location. Inside, they’ve got an upgraded bar in and industrial space with concrete floors and some wood paneling. Large roll-up garage doors, board games and more to keep you busy, you can definitely while away an hour or two sipping on their ciders.

And they’ve got a much larger offering of ciders ranging from 4 or 5 regular ciders, 8 or so seasonals and then some guest taps. Bull City Cider Works tends to do a sweeter cider but offers a variety of cider styles to keep most everyone happy, especially those that need to stay away from glutens. They’ve also got a food truck schedule, the Kings Sandwich shop Airstream was there during my visit. Bull City Cider Works is pretty busy during our holiday visit so I guess the city likes doing something other than craft beer, too.

So if you’re ever out and about in Durham you might want to check out the new Bull City Ciderworks for an impromptu visit.  While I enjoy my beers, there are now so many craft breweries in the area, it might be interesting to switch things up with some cider.  Especially if you’re in the DPAC area for a show, so a big cheers to the new Bull City Ciderworks!  Because man (and woman) can NOT live by beer alone even if we may think so.