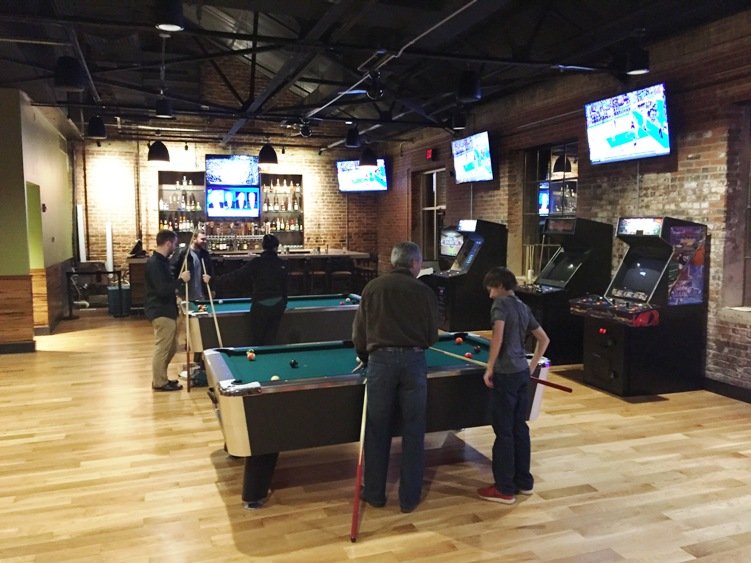 Media: The New Tobacco Road Sports in Raleigh, a Great Spot for the Big Game

As a pro football and baseball fan, I love my sports bars! A place to grab some wings and a burger and cheer on your team in a crowd sounds like a good Sunday to me. And when Tobacco Road Sports came onto the scene in Raleigh on S. Glenwood, it raised the bar for that category of restaurants in Raleigh. So it was definitely with some sadness when I saw that it had closed during 2016 to move into a new home around the corner. Thankfully at the end of year, construction finished up on the new Tobacco Road Sports and as luck would have it, I was able to pop in during its soft opening to see what the new, better and bigger Tobacco Road Sports would be bringing to the hood.

Moving into the old Natty Greene’s space was a huge endeavour for Tobacco Road Sports Raleigh. Not only is the space gargantuan but apparently there was a LOT of fix-ups required which is why opening the new spot was a bit delayed. But at least they’ll be ready for the Superbowl and March Madness! I was pretty familiar with the old Natty Greene’s so I was super curious to see what had changed. From the outside you won’t notice much, step inside into the new Tobacco Road Sports and you’ll still find the hostess desk and brewing equipment up front. But to the left side, the space has been upgraded with a large multi-screen display and the upper balcony (additional seating and private rooms) has been opened up. You can reserve a space with a food/beverage minimum for your private party. This part of Tobacco Road Sports Raleigh reminds me a bit of H Street Kitchen and its open dining room.

Moving into the dining room on the right you’ll find the brick and warm woods that sat in the old space. Fifteen or so flat-screens are perched overhead to catch the game, the new Tobacco Road Sports is actually less television dense than the old space. It reminds me more of the layout in their Chapel Hill location, blending in more restaurant than pure sports bar. But there are still plenty of screens to watch the game. I’ve come in for two visits so far (soft opening and dinner at bar) and the menu stays true to the Tobacco Road Sports formula. You’ll find an array of delicious appetizers (wings, egg rolls, sliders), their famous nachos, salads, sandwiches along with a mix of main entrees including their popular country frizzled and drizzled chicken!

And I can tell you that the everything tastes as I remember. Love the cheese steak with tobacco onions along with their egg rolls. I also tried out a nice plate of barbeque beef ribs which are a bit different for the area (pork ribs the norm). Given the newness of Tobacco Road Sports Raleigh, it may take some time for the kitchen to settle down but I’m sure they will get everything buttoned up given their experience. Overall it was everything I expected out of their uplifted sports bar menu.

After finishing dinner, I couldn’t resist a look into their third room which has been transformed into a game room and bar area. There’s a lot of space to stretch out in and burn off some of those calories you just ingested here! Foosball, Pop-a-shot, skee-ball, along with some pool and pinball tables, console games and my favorite boxing game. It’s an interesting use of this space and works better as a bar and hang-out area which is a nice upgrade.