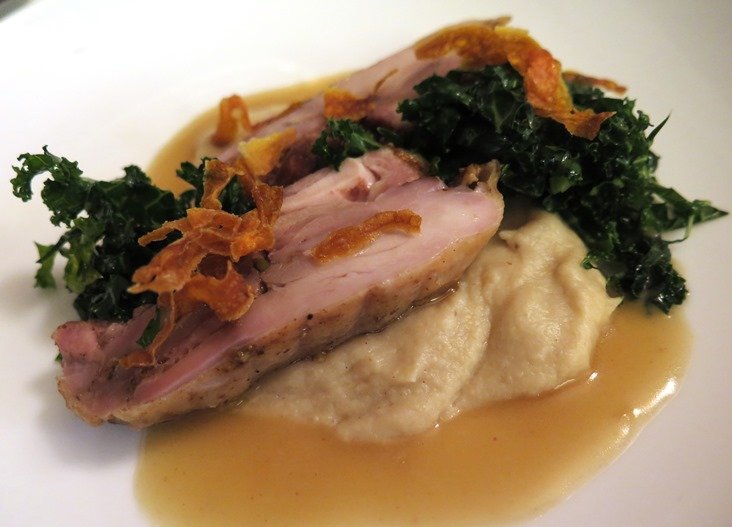 Media: Cooking for a Classic Heats Up at 1705 Prime in Raleigh!

As a previous fan of the old Competition Dining series I was happy to hear that Rocky Top Hospitality and the Lucy Daniels Center were resurrecting that culinary concept for 2017! Now coined Cooking for a Classic, 16 chefs would compete in a six-plate, elimination series of dinners where diners would get to vote on their favorite dishes with the winner moving on to the next stage. Chefs would be given a fixed budget to feed the crowd and all plates would have to be prepared day of event. As a twist, the plates for Cooking for a Classic would all be accompanied by a beverage pairing which is just a bonus for the lucky diners. And all the net proceeds go to the Lucy Daniels Center thanks to the generosity of donations from sponsors!

As the chefs progress through the four rounds of Cooking for a Classic, the budget for the meals are increased at each stage. The 16 initial chefs will get whittled down to the final winner, who gets to drive away in a beautiful 1969, yellow Corvette Stingray, woohoo! Luckily I was asked to join one of the first Cooking for a Classic dinners as a guest judge. Chef Nick Fay from Vidrio would be pitted against Chef Donaldo Guzman from Sitti, mano a mano. And I can tell you for sure that it was a fun and delicious evening that you should consider as a Triangle food lover!

Entering 1705 Prime on a warm Tuesday evening, the action was already in full swing with a buzz murmuring through the crowd. At the judges table I was joined by Colleen Minton from Terra Vita and Chef Scott Schabot from Cameron Bar and Grill. After pulled up the voting website online, we toasted to a great evening with our starter cocktails and now it was time to let the eating begin!

First up was the vegan-vegetarian appetizers course! A salt-baked celery root paired with a celery spritzer vs. a spring roll with a side of cilantro soy sauce paired with a spicy POM cocktail. While the baked celery root showed some good creativity and textures, the flavors just didn’t work for me so I ended up enjoying the more basic and tasty spring roll out of this pair. Plus the Pom cocktail pairing was excellent and brought some fruit to the savory rolls.

Moving on to the entrees, we were dazzled with a tender chicken roulade with celery root puree and a 12 Linojes verdejo against a Za’atar duck breast with brussels sprouts and pomegrante gastrique. Paired with a Valdamillo red and the white truffle polenta put this duck dish over the top for me even though the chicken entree was REALLY well done. The verdejo wine pairing was unfortunately, watery and weak making for an uphill climb with Entree A.

And finally, dessert! Often enough in this culinary competitions, dessert can be a turning point since the taste-buds are dying for some sweets and being a good chef doesn’t always translate into being a great dessert or pastry person. Dessert A offered up a lovely sweet potato cake with semi freddo, black pepper crumble and sorghum drizzle. A really well balanced dessert that wasn’t too sweet but just right paired with an Oskar Blue TenFidy. Going against it was a more conventional triple-layer chocolate mousse cake paired with a Scotch ale. And while the mousse cake was really nicely prepared, I’d have to give the edge to the sweet potato cake given its more playful choice of flavors and a delicious beer to go with it. Winner, Dessert A!

While the food was all delicious, I found that the beverage pairings really impacted my voting since you were enjoying a mini-meal for each course. And as the votes were tabulated, Team Vidrio (Chef Nick) and Team Sitti (Chef Donaldo) were introduced to the appreciative and full crowd at 1705 Prime. A happy round of applause for both these hard-working teams for putting up such a great effort.

But when everything was said and done and votes counted, Team Sitti walked away with the win and into the quarter-final for Cooking for a Classic. And the lucky diners at 1705 Prime all headed into the night, dreaming of the great meal they just experienced. I know I sure did! And if your mouth is watering over these pictures, there are still some competitions left and tickets available for your enjoyment. Come out and support the Lucy Daniels Center with a great meal at Cooking for a Classic. You can thank me later!

The Lucy Daniels Center Cooking for a Classic competition!

Media: Vidrio, a Colorful and Luxurious Take on Mediterranean Small Plates in Raleigh
Next Post:Retake: Randys Pizza in RTP Serves Up a Perfect NY Slice