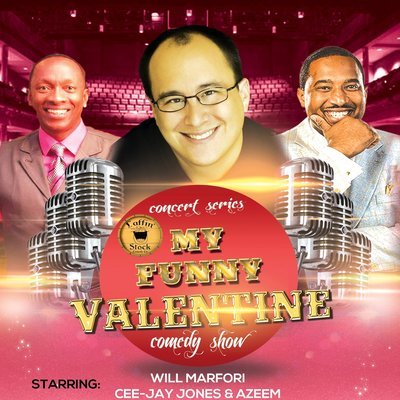 Who couldn’t use a good laugh in their day? And what better way to get a laugh then a comedy show in Cary? I had the chance to sit down with local comedian Azim Muhammad (Azeem) at the Mayton Inn to chat about his upcoming My Funny Valentine comedy show (2/11/17). Part of the Laugh for Life tour he runs to bring attention to prostate cancer, Azeem is kicking off an NC comedy tour at the Cary Arts Theatre on Saturday, May 11th. He’ll be joined by fellow comedians Will Marfori and Cee-Jay Jones (Greensboro) for a laugh-filled show perfect for your beloved valentine. Check out the video clip below and if your funny bone is tickled, come on out to the Cary Arts Theatre on February 11th!

WILL MARFORI
Will Marfori is an original, intelligent voice in a chorus of stand up comedy, Will’s joke writing, delivery and wit stands him apart from the others. He cleverly shows that a man with cerebral palsy can relate to the rest of us and make us laugh at our flaws. Will has appeared on the Late, Late Show with Craig Ferguson and is a regular on Sirius/XM Satellite radio. Performing at comedy clubs, colleges, and cruise ships, Will tours almost 50 weeks a year all around the world.

AZEEM
“Fresh, Exciting, and Drop-Dead Funny!” are a few words to describe Azeem. This 2002 MPAC Image Award Winner has earned the reputation as one of the top acts in comedy. His ability to intertwine “a message in the madness” binds all who hear to laugh while assessing themselves at the same time. His amazing sense of humor builds unity, regardless of nationality, religion, gender or ethnicity. His comedic style affords reaches people in ways many people never attempt. He’s appeared on Comedy Central, Comic View, and a favorite on Royal Caribbean and Carnival Cruise Lines.

CEE-JAY JONES
Greensboro’s OWN Cee-Jay Jones is one of the hottest, freshest comics to hit the comedy scene. Cee – Jay is wild and totally outrageous, with a style of comedy that is all his own. His stage presence, quick wit, high energy and rapid-fire delivery will keep his audiences laughing non-stop from the moment he hits the stage. He’s Appeared On BET’S Comic View and Showtime At The Apollo.