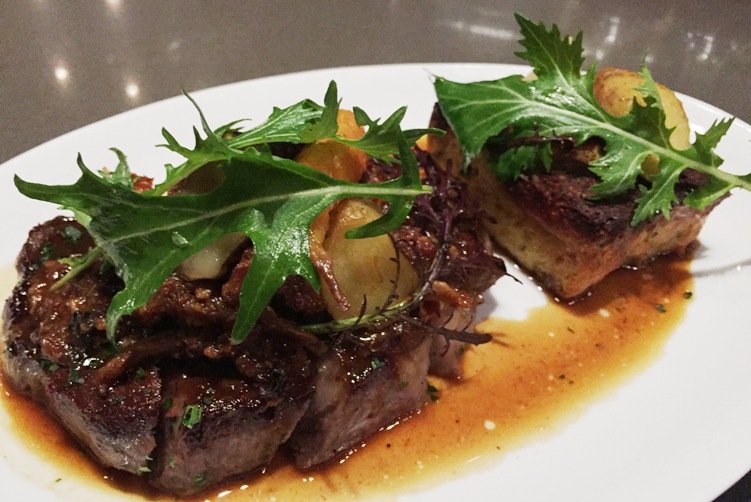 Crawford and Son, Raleigh – An Upscale Comfort Food and Dining Experience for Raleigh

In the Triangle, it’s not too hard to keep up with the changes, comings and goings of culinary talent in the area. But it was interesting to see what James Beard-nominated Chef Scott Crawford has been up to over the last two years. Moving from Herons at the Umstead Hotel in Cary to Standard Foods in Raleigh took a bit of time. Then his departure from Standard Foods to start his own restaurant threw another twist into the plans. So it was with great fanfare when he finally opened up Crawford and Son at the end of 2016. Located in the old Piebird space on Person Street in Raleigh, his new restaurant was only a hop, skip and a jump from his previous stint at Standard Foods. There was certainly a lot of buzz around Crawford and Son but I decided to wait a bit before I popped in for a visit. But given it’s only about 2 blocks from my gym, I would eventually get sucked in on a warm Tuesday evening…

As I walked over to Crawford and Son, I realized that I hadn’t been to the departed Piebird in ages, so I had nearly forgotten about this space over the years. But I can certainly tell you that Crawford and Son has gone in a totally different direction than its predecessor in terms of decor. Sleek, grey and minimalist is what leaps into mind when I stepped inside. Lots of dark palette hues in brown, blacks and grey dominate the space and it all feels quite modern and well put-together. The dining room has some good energy with light indy rock playing overhead along with the buzz of the crowd.

Reservations are needed for most tables at Crawford and Son unless you want to dine before 6 or after 9pm but the bar has plenty of open seating on this Tuesday evening! And while the food and menu is on the more upscale side for Raleigh, it’s a more casual environment so I’d describe the dress code as casual or dressy but neat! I grab a seat and chat with the bartender Rachel a bit, I had run into her several times previously at Tazza Kitchen so it was good to see a familiar face here!

The menu at Crawford and Son is tight and carefully curated. Three to five items in each of five food categories: appetizers, raw, entrees, sides and dessert, mostly upscale Southern-comfort fare. Along with a smallish list of wines, beer and cocktails, I start off with their Smoke Detector which mixes mezcal, smoked honey and grapefruit, delish! The menu is pretty much all a la carte with appetizers in the $10 to $15 range and entrees from $20 to $30. One good thing about the small menu is that it doesn’t take long to decide, you just put your meal in the hands of the talented chef and let her rip!

My first dish out of the kitchen is the very popular yellowtail crudo. It’s a visually stunning presentation with slices of pink tuna in a miso-lemon-pepper broth. Translucent triangles of radish and white rice puffs dot the bowl along with the darkened bits of seaweed. There’s a lot of luscious mouth feel in this dish along with different textures ranging from soft and supple to crunchy and light, a very satisfying starter.

For my entree I kept things simple, going with the long-favored and a well-marbled rib-eye steak. Crawford and Son does things a bit differently here. They serve up a sizable piece of tender beef about 1″ thick and slit to expose some surface area. A bacon jam, mushrooms and braised root vegetables sit on top of the rib-eye to provide some texture and earthy flavor to this beefy cut along with the wonderfully savory bread pudding. Note that while Crawford and Son is an upscale restaurant, portion sizes here are on the generous side, you certainly won’t go home hungry!

And even though I can’t finish my entree after the large crudo plate, I can’t resist dessert here given it’s my first visit. Crawford and Son has a wonderful sounding sugar cream pie with huckleberry sherbet, thank you very much! The pie is a wonderful creation with a thick buttery crust, smattering of granola and the tangy berry sherbet. Again, a great mix of textures, flavor (sweet and tart) making for a very happy ending.

Service at Crawford and Son is excellent, they are professionals here, know the menu and how to provide attentive service without overdoing things. I recognize several people on the staff from some of my other favorite area restaurants so they’ve done a great job recruiting talented people at Crawford and Son to complete your dining experience. So a slow round of applause for Chef Scott and his namesake restaurant. In several short months they have already established themselves as a Raleigh favorite and the praise is certainly well-deserved. Hope to be back again soon and finish up another one of my workouts with some culinary curls at the very tempting Crawford and Son!

News: Cooking for a Classic Tickets Now on Sale!
Next Post:News: 2017 Toast to the Triangle in Raleigh Returns to the McKimmon Center at NC State!