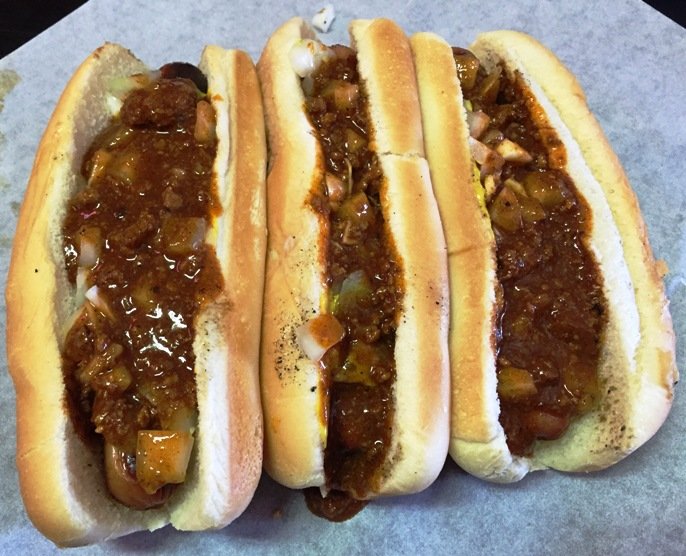 Retake: A Wiener-riffic Lunch at the Classic Roast Grill

If you’re visiting Raleigh for the first time, it’s always great to check out places that give the Oak City its true personality. And the Roast Grill is usually mentioned by locals and visitors alike as quintessential Raleigh! Why? Because it’s been around since 1940 and serving up the same, single food item for the past 70+ years. Hot dogs! But even with this remarkably simple menu, people still line up for lunch all the time at Roast Grill. And here’s why…

I head on over to the Roast Grill over the holiday weekend, a bit after 11am on a Saturday. Peek into the window and they aren’t quite open yet. I see some movement inside but the light’s not on so off I go to do some chores and head back over at about 11:30. Inside its small interior the Roast Grill has about 12 counter stools, tightly packed along with some small 2-top tables on the side. I’d have to guess maybe 22 seats in total which is why there’s often a line outside the door.

The space is compact, to say the least. Small grill to the right, shelves lines with pop and beer bottles along with lots of NC State paraphernalia. Above me is a tribute to Man vs. Food which did a feature episode on the Roast Grill and features a variety of happy customers but I missed the pic of my friend Kristen (Gadaboutfood) up there! Roast Grill’s owner, George is in the corner working the grill which has condiments, wieners and white bread buns piled about. A grandfatherly fellow in a US Veteran cap is taking the orders and mom is in back working the chili. It’s a total family affair here at the Roast Grill!

My order of three dogs is taken and I get a Red Stripe beer for good measure. Along with a tootsie roll which I’m guessing is the Roast Grill’s signature dessert-sweet ending! The small space is slowly filling up and thankfully it’s not too hard to figure out what you want to eat here with the very simple menu. I soon get my three dogs on a piece of white wax paper and they are done up “all the way”. That means chili, onions, and mustard. The dogs here are a good 10″ long and come slathered with a healthy portion of condiments. The chili is meaty with some slight cumin flavor and the mustard tang stands out paired with it. Add in some pungent onions and you won’t be kissing anyone soon, after eating at Roast Grill. The dog itself is mild and a bit soft without much snap to the case but it all works in total with the toppings and bun.

I scarf down my three dogs, pay up (about $11) and head off to give up my seat to the crowd behind me that has formed at the Roast Grill. All I can say is that the Roast Grill is everything you would expect for a Raleigh classic. Don’t come for the food or for a bargain, but do come for the ambiance, charm and cast of characters that inhabit this little eatery. When you’ve been around for 70+ years, who really needs or wants to change, eh?

Barry’s Cafe in Cary for Casual Diner Grub!
Next Post:Thai 55 in Durham for Affordable, Spicy Flavors at Lunch or Dinner!