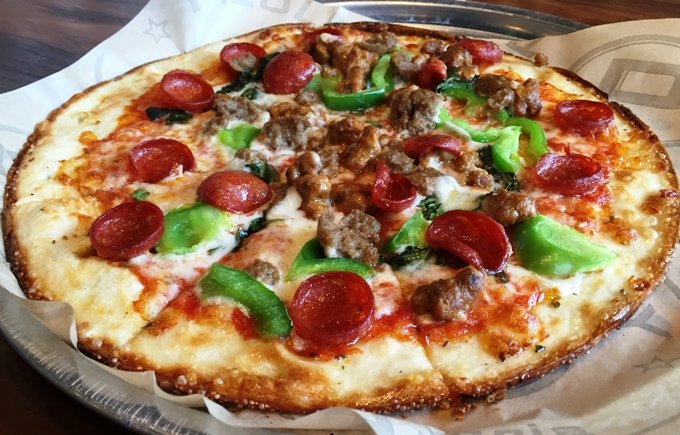 When it comes to pizza, I really can’t get enough. And what’s really cool right now is that pizza has been brought into the 21st century with the Build Your Own Pizza (BYOP) model. Imitating the Chipotle service model, BYOP allows you to customize an individual pie, JUST the way you like it. And you’ve got several options for BYOP in the Triangle: Blaze Pizza, Mod Pizza and now the new Pieology in Raleigh. So as a fan of Blaze Pizza, I just had to check out the competition. So it was time for lunch at Pieology near NC State in Raleigh!

Located conveniently on Hillsborough Street in the new Stanhope building, Pieology is perfectly located to serve the pizza eating needs of Wolfpack students. Inside, the space is similar to Blaze: high ceilings, some corporate art and a order and assembly area. It all feels very modern and somewhat cool for a quick-casual spot. You choose your pie at the front and then pay at the end, just like Chipotle (Note: Pieology has opened a 2nd Raleigh location in North Hills)

The menu is simple but complex like most BYOP pizza places: salads and pizzas BUT the pizzas just have so many options. Outside of the seven signature pies, Pieology offers you the choice of 3 crusts, 7 sauces, 15 cheeses and meats, 15 toppings and then 4 after bake drizzle sauces. The crust is spread and flattened right as you order and then you can add your sauces and toppings as you move down the line. As a lazy pizza person, I just go with the Mad to Meet You (pepperoni, sausage, meatball, mozzarella, house red sauce & olive oil) and add some green peppers, basil and Parmesan cheese. I cash out, grab my beer and number and grab a seat!

It takes about 10 minutes for my pie which isn’t too bad of a wait. And it’s a good looking pie, Pieology does a 11.5″ individual and there are plenty of high-quality toppings. The crust is thin and stiff, similar to a bar pizza and the edges are well-browned. A peek at the crust bottom shows off some leopard-spotting, it’s cooked perfectly. I take a bite and the crust is snappy and toothsome, the sausage and meats are well balanced with the cheese but the sauce is hard to pick up. At over 1,000 calories, I only eat half for lunch but yeah, I could have chowed down the whole pizza!

So yeah, it was great to meat you Pieology! While the concept is really similar to Blaze, I’d have to categorize Pieology as more gourmet/quirky bar pizzas. They’ve got some extra options to their pies and it’s good but not trying to mimic the Neapolitan style I enjoy so much. And I’m pretty sure that Pieology will be a huge hit with the NC State crowd once they’re back in school come September. Because if anyone appreciates good (and bad) pizza, it’s a college kid! So rock on Pieology, I’ll have to come back and do some more studying for my imaginary set of pizza final exams…