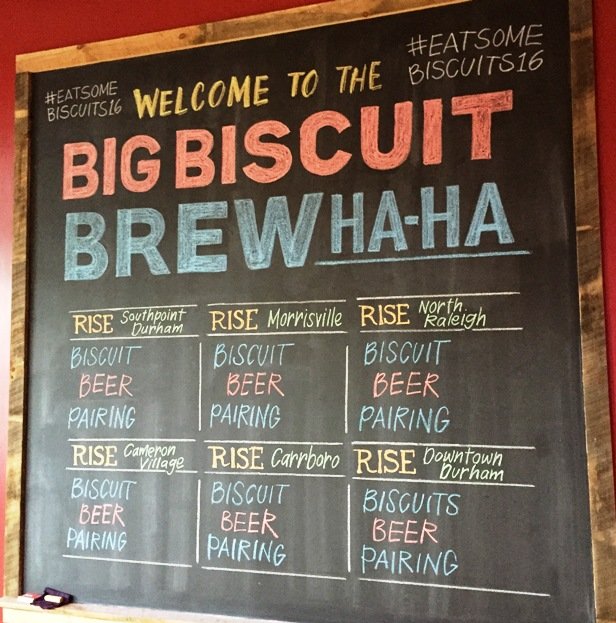 When it comes to biscuits and donuts, you can count me in! As a fan of Rise Biscuits and Donuts, you can bet I was excited when I got notice of their upcoming Big Biscuit Brew HaHa event. A fundraiser for the Leukemia & Lymphoma Society and NC Triangle Man & Woman of the Year competition. Rise’s Gray Ferguson is the sponsor for the Big Biscuit Brew Ha-Ha and funds raised during this event will go to L&LS. At $35 a ticket it seemed like a great way to raise money for a great cause AND chow down on some biscuits, donuts and beer on April 7, woohoo!

What makes this event really cool is that the six Rise Biscuit and Donut chefs were paired with local celebrity chefs from Poole’s Diner, Crooks Corner, Pazzo, 18 Seaboard, Mateo along with six NC breweries to create biscuit-donut and beer culinary trifectas. I showed up a bit before 6pm at the Rickhouse and there already was a line formed out front.

Once we were let inside, we each go three tickets to vote on our favorite biscuit, favorite beer and favorite pairing of all three. Additional tickets were available for $1 each so I grabbed 10 for the evening. As my friends and I went from table to table it became readily apparent to me that I was NOT going to finish all six offerings. I figured I would be good for three before passing out from carb overload. While the biscuits were not full-sized, the donuts were the real deal and the beers were maybe 6 oz. pours. But we’re talking about 3 carb bomb categories here, so the Big Biscuit Brew Ha-Ha is not for the faint of heart or stomach.

Everyone was excited and working hard at either prepping dishes or chowing them down. I really enjoyed the shrimp biscuit (with tomato, cabbage and hot sauce) from Matt Kelly at Mateo which came at things from a different angle. And all the donuts were awesome but definitely full of sugary calories, yum. Room was a bit tight in the Rickhouse but staff made their best efforts to keep tables cleared for the large crowd.

I made it to about my 4th biscuit-donut-beer combo, a tender porchetta biscuit and tapped out, no mas! My stomach was in no shape to eat any more so it was time to enjoy the scene at the Biscuit Brew Ha-Ha. For the event, there were three ornate “championship belts” for the winners which was a very nice touch. And while I didn’t get to stay for the entire event, I did hear that the porchetta biscuit from Pazzo-Rise Southpoint and the beer from Fortnight (lemon shandy) won the evening along with the Rise Carrboro-Crooks Corner for their pairing.

All in all I’d have to say that the 2016 Big Biscuit Brew Ha-Ha was a rousing success for Rise, the Leukemia & Lymphoma Society along with the foodie crowd at hand. Great food, great fun along with lots of money raised for a great cause. Here’s to a 2nd year of the Big Biscuit Brew Ha-Ha in 2017 and there’s still time to donate to Gray Ferguson’s campaign as the L&LS Woman of the Year, here!

Media: Preview of the Renovated On the Border in Cary!
Next Post:More Than Pizza & Subs, Great Restaurants and Food Near UNC Chapel Hill