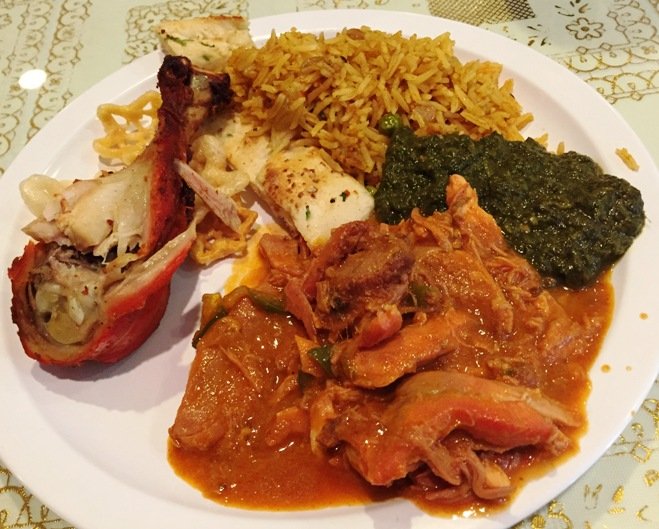 Every now and then a craving for Indian food hits me and I’m powerless in its grip. Working in RTP means limited dining options but a quick search online turns up India Gate off of Highway 54. The reviews look pretty good so it’s time to see what spiciness India Gate can offer up for lunch! 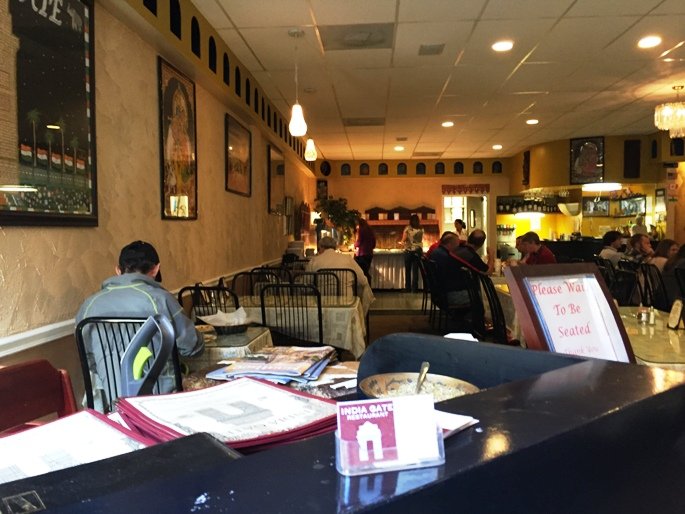 You’ll find India Gate tucked away in a slightly sunken plaza full of ethnic businesses and right next door the MEGA Club, cool. Head on to the back corner and you’ll find a small doorway that opens up to a large dining room and space, a bit of a surprise from the outside. India Gate is already a bit busy before noon time and it seems to be a popular spot for Indian food lovers in the know. I get seated at a four-top, order up a beverage and then head on over to the lunch buffet in the corner.

It’s a well-stocked buffet with salad, 16 or so hot entrees including two rices, samosas, a garlic naan, saag, stewed chick peas, tikka masala, vindaloo, butter chicken and tandoori chicken. Also a very nice selection of desserts, two which I’m unfamiliar with (meethi chakri and boondi).  There’s definitely plenty of Indian options for vegetarians and non-vegetarians alike! I stack up a plate with some veggie biryani, saag and chicken for my first round.

As I explore around my plate of Indian eats, I notice a couple of different items on my plate. First some star shaped crunchy bites, sort of like a rice cake. And then the garlic and herb stuffed naan, cool! The biryani is a bit different. I assumed it was a veggie biryani but I taste some sweet stewed fruit in there. The saag is basic and tasty and the tikka masala is also a bit different. Spicy but not as heavy with cream and laced with bits of green pepper. The tandoori chicken is good and a nice option for chicken on the bone. My second round includes the butter chicken which has more of a cream-based sauce which I’m familiar with. Overall everything is well-spiced and flavorful with a touch of heat.

I finish off with some of their interesting desserts, mostly a play on fried flour treats sweetened with sugar syrup, tasty! I pay up front at the counter ($10 for lunch buffet) and chat with the owner a bit. She’s from the Punjab region in the north and it’s always interesting to see how Indian eats always have a bit of a twist based upon the origins of the owner. I’d describe India Gate as more down-home Indian cooking with a great variety of savory and sweet options for lunch which is lovely. Service was very attentive and courteous throughout the meal, another plus! So thanks so much India Gate, I just may have found my Indian eats home when I’m working in the RTP.