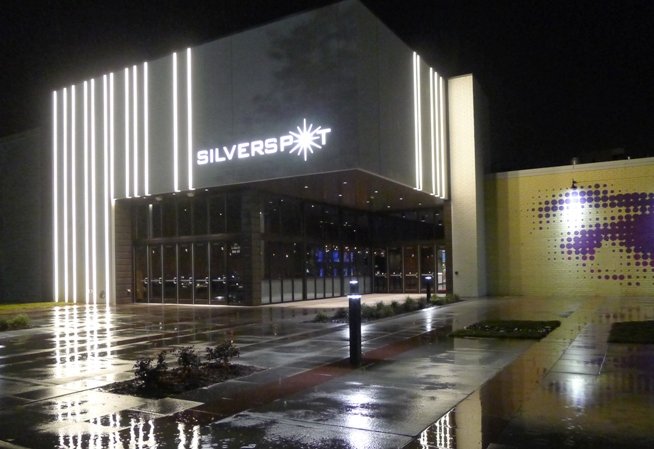 Over the past year or so, movie-watching has taken a huge leap forward in the Triangle with the new Cinebistro in Cary and not to be outdone in Chapel Hill, the new Trilogy Restaurant at Silverspot Cinema! A smaller, privately-held luxe-cinema chain, Silverspot has several locations in Florida and has moved up north to Chapel Hill for its first NC cinema. So while I hadn’t heard much about Silverspot, I was excited to check it out for its facilities and also its new house restaurant, Trilogy! So off I headed to Chapel Thrill on a cold, wet Monday evening…

From the outside, Silverspot Cinemas presents a sleek and modern front. Cool, brushed silver facing with bright white lighting and logo. Inside you’ll find Trilogy restaurant near the entrance on the left. But I was here a bit early, so we took off on a quick cinema tour with head of marketing, Randi! The movie-watching set-up here is a bit different than Cinebistro. Large leather luxury seating but you need to bring your food in from concessions or Trilogy. The seating also sports wide ottomans in front instead of motorized leg-rests. And the seating seemed to be primarily in pairs with no arm-rests in between which I guess is better for snuggling, eh? But overall it’s a similar concept with plenty of comfortable seating. Randi also has plans to bring an international film festival to the area so keep your eyes out on this woman!

Back at Trilogy, I grab a beer at the bar which is long, stylish and sophisticated. Just be aware that it’s pretty pricey at $8 for a pint of Deep River stout which is not too surprising. But it’s a cool lounge to just hang out in before your movie!

I’m pretty excited to learn more about the David Burke Food Group which is running the restaurant along with Chef Ed Brothers who will run this kitchen. Chef Ed has an impressive culinary resume ranging from Le Cordon Bleu in Paris to mentorships under Charlie Trotter, Gordon Ramsay, Thomas Keller and David Burke! The man definitely has some talent with the food here.

A group of 8 of us move into the dining room and are given menus. Appetizers at Trilogy run from $6 – $12 with entrees in the $12 – $25 range and the menu is focused on American classics with a twist. We start off with some great appetizers off the menu: deviled eggs, crab-cakes and their popular kung pao calamari! The deviled egg is lovingly presented in an Asian soup spoon topped with some crisp NC prosciutto which is EXCELLENT! The cool egg contrasted against the creamy yolk and crispy-salty meat is wonderous, a great thumbs-up here.

Next up is the flavorful crab-cake with some green apple slaw which is very nice but not quite a stand-out. But the kung pao calamari?! Wow, very delicious and different. The calamari is prepared in such a way that it has a slightly crunchy coating underneath the sauce which then lies on top of VERY tender calamari. It was so tender I thought I was eating chicken and I love the presentation with black-white sesame seeds and chopsticks. The sauce is not so spicy, slightly sweet but very tasty.

For my main I keep things sorta simple. While the rest of the table is ordering steak, I go with the more “basic” lobster roll which as you can see, is not so basic. Served on a brioche roll with tarragon mayo, tomato and bacon, they are nicely grilled on the outside with butter and flavorful without being heavy. Definitely a spin on the traditional New England lobster roll but I can appreciate this modern sensibility.

To finish up the evening, the famous cheesecake lollipop tree is brought out and these are amaze-balls! While they are small and tidy, each pop is loaded with flavor whether it’s chocolate or strawberry. Served with some bubble-gum whipped cream, it’s a decadent ending to the meal with lots of luscious mouth-feel. But of course they couldn’t resist sneaking one final dessert out, a lovely tiramisu but don’t miss out on that lollipop tree!

We finish up the evening trading business cards and saying good-bye. Thank you so much Chef Ed, General Manager Seth and Randi for a lovely and delicious evening! Compared to Cinebistro which I got to preview, the food and fare at Trilogy is definitely a solid step up. I would quantify it as maybe a 4 1/2 star restaurant from a dining standpoint which is pretty durn good for its location. So if you live in Chapel Hill and enjoy your movies and food, I think you’d be hard-pressed to find a better evening than dinner at Trilogy and a movie at Silverspot. Having previously lived in the area I can say that you’ve now got a very ambitious and cool entertainment option in the Thrill. Enjoy it and don’t miss out, my Carolina friends!