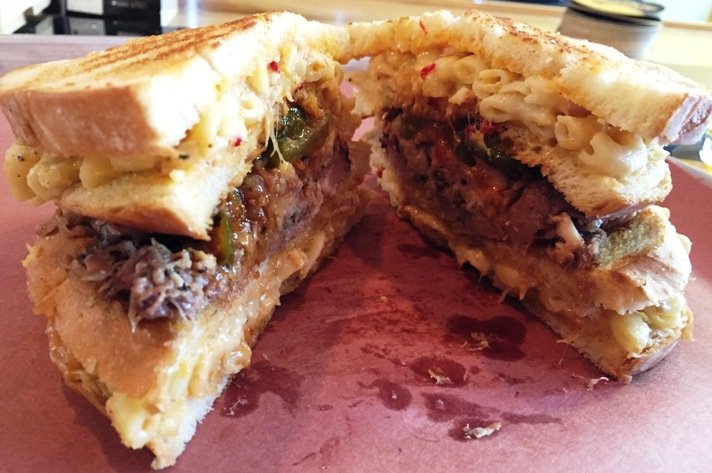 Just like the popular Only Burger, Big Mikes BBQ has made the leap from food truck to bricks and mortar.  I had first tried out his smoked meats when his little red barn would show up in Cary off of Regency Parkway.  Followed him to his food service at View Bar and finally to his own barbeque restaurant, the newly opened Brew n Que.  Part bottle shop, part que shop, how can you go wrong with beer and brisket?

Brew N Que is located in the central part of Cary off of Maynard and High House.  Small strip plaza, minimal signage, you’ll need to know the address or just that it sits next to Great Harvest Bread.  Inside Brew N Que, it’s still taking shape.  Wall of beer bottles on one side with some picnic tables next to it.  Counter on the other side along with some beers on tap.  It’s a humble set-up and will continue to evolve over time.  Just focus on the beer and barbeque, my friend.

The menu at Brew N Que is pretty much the same as Big Mike’s other incarnations: pork barbeque, brisket, smoked wings, along with some interesting sides (piggy mac, red neck nachos).  Today we order up some wings and I do the Big Cheesy as my main for lunch today.

The food comes out pretty quickly, the smoked wings are a favorite for customers here. Seared, smoky tender chicken wings laced with brown sugar on top, very tasty! At $1.50/wing or 6 for $8, they aren’t cheap but just realize that Mike the owner of Brew N Que is very particular about meat quality and sources the good stuff locally.

My Big Cheesy comes out next on a 1/4 aluminum pan and it’s a monster of a sandwich. We’re talking about two mac n pimiento cheese sandwiches wrapped around some barbeque, sweet pickle and BBQ sauce. The mac n cheese part of the sammich alone should be enough for lunch but it’s quite stuffed with barbeque and shows off a nice tang from the pickles and sauce, delicious! And the high-quality white bread is nearly thick enough to be Texas toast, a nice touch. As you can guess, I only ate half leaving the other piece for a later meal.

My friend’s chopped chicken and pork also looks great and plentiful. I’m sorry to have missed the basic meats here at Brew N Que, until next time! Service at the bar was professional and attentive so all is good on that front. Overall, Brew N Que is doing an excellent job on their barbeque and smoked meats. Owner Mike Markham is a demanding pitmaster and it shows up in the quality of their food. They may be moving next door to a bigger space but until then, enjoy the beer and barbeque at this little joint for now!