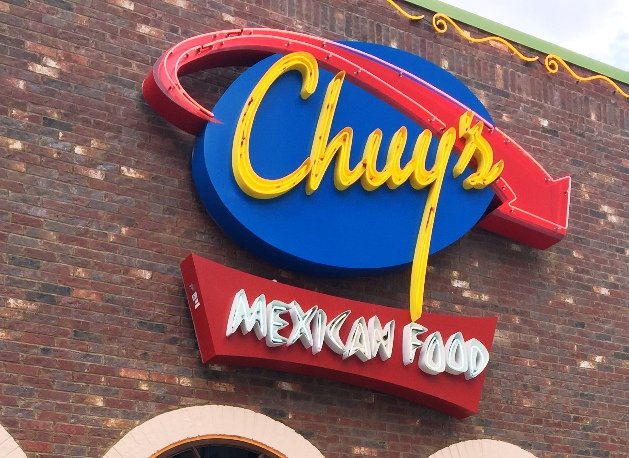 Chuy’s North Hills Brings the Spiciness and Tex-Mex to Raleigh!

Based out of Austin, TX, Chuy’s is a popular Tex-Mex chain that’s known for its bright decor and spicy food! I’m typically not a fan of chains and prefer small mom-and-pop ethnic joints so I was a bit wary about dining here after it opened in November of 2013.  With three restaurants in North Carolina, Chuy’s Raleigh is located in the North Hills area so it was finally time for a quick meal and visit.

From the outside, Chuy’s is a large, brick presence in North Hills. Bright, neon signage, painted benches out front, it’s got an immediate Southwestern feel to the place.  Oddly, there aren’t many exterior windows to the place. Stepping inside, the regional theme continues. Brightly colored and painted interior, tons of multi-hued decor with themed rooms! The bar area is littered with painted fish on the ceiling and dog-centric kitsch.

What initially caught my attention about Chuy’s is their happy hour special, a nacho car! From 4 – 7 pm Monday to Friday, they offer free nacho chips and sides. Chuy’s chips are super thin and crispy and served with queso, crushed tomato, seasoned ground beef and refried beans. And yes, you could make a small meal out of the complimentary nacho car.

The bartender at Chuy’s greets me cheerfully, I grab a Negra Modelo while I wait for my friend and contemplate chips and queso. Chuy’s menu is pretty tight with a mix of burritos, tacos and enchiladas, the usual Tex-Mex offerings. Entrees are mostly under $12 which is pretty reasonable.  What makes the food at Chuy’s a bit different is the emphasis on New Mexico hatch chiles which tinges the menu. I order up the chicka-chicka boom-boom enchiladas with beans and rice.

But first a quick trip to the nacho car for a starter of loaded chips, yum! It takes 10 – 15 minutes for my main meal. I get a plate of two rolled and stuffed, chicken enchiladas covered in a creamy cheese, pepper and cilantro sauce. Some nice Mexican rice along with beans fill out the plate. And it’s a solid meal, plenty of food but not quite as much food as I expected based upon online reviews I had seen for Chuy’s! Spiciness for the enchiladas was a solid medium, so nice job there.

Service at the bar was very attentive and personable, they definitely train their staff well at Chuy’s and take pride in their service. Looking around the room it was filled with happy North Hills peeps enjoying their eats and nachos in the colorful space. And overall I was impressed by Chuy’s even though I didn’t expect that much. Their Tex-Mex is above-average and once you tie in the colorful decor, great space and even a large patio out back, you feel like you’re getting a deal in this casual eatery! So come on out to North Hills and check out Chuy’s. I can tell you for certain it’s nacho typical Tex-Mex eatery…

First Take: Lexington Barbecue #1 For Classic NC Barbeque
Next Post:Wasabi in Cary Dishes Out Good Food But Not Enough Spice