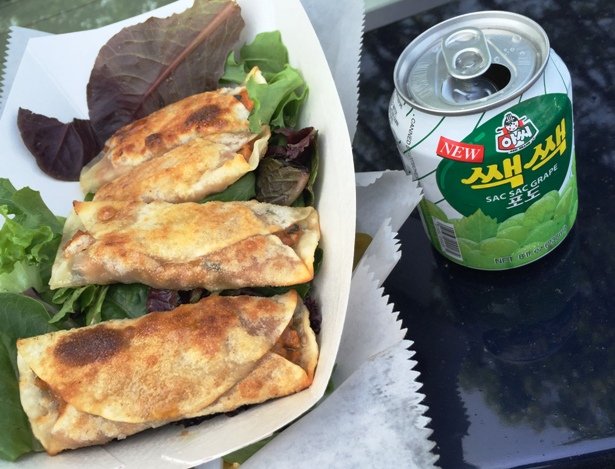 Bo’s Kitchen in Raleigh, Korean Food Like Mom Would Make

So I may not be Korean but I’m pretty sure if I had a Korean mom, she would make food like Bo’s Kitchen puts out! Bo’s Kitchen food truck had been on my mental mind map for months and I was finally able to track them down in the Mordecai neighborhood a while back. And yes, they were worth the wait and effort!

One of the reasons I had a hard time tracking down Bo’s Kitchen was because they don’t have a website (woohoo, they now have a website). But they do have a pretty active twitter account and Facebook page if you want to track them down. Bo’s menu is pretty basic: bulkogi, spicy pork, spicy chicken with either rice or bread at $9. Some dumpling options, edamame, kimchi and that’s about it! I keep things simple going with some beef bulkogi (rib-eye) and some spicy pork dumplings (mandu). Bo offers up some Korean grape soda (Sac Sac) to try out which is pretty cool! Super refreshing and canned with some peeled grapes inside…

My food only takes five minutes or so and it’s a lotta food! The mandu dumplings are beautifully pan-fried and folded over. It’s a tasty treat but not as spicy as I would have hoped for.  I dig into my bulkogi which is served up with some scrambled eggs, pickle and jalapenos.  Both dishes come served on top of greens which is a nice touch. The bulkogi is quite good, lean and full of flavor. Paired with the egg and it’s a lot to eat. But I’m up to the challenge!

Happily stuffed, I was pretty impressed with Bo’s Kitchen. He’s an enthusiastic and happy guy putting out good Korean eats. I’m not sure if his mom is cooking in the truck but it sure tastes like it! I don’t always get to eat Korean food because it’s hard to find in the Triangle so make an effort to check out Bo’s Kitchen. And yes, I know it may not be any easier to find with a moving truck but it’s worth it, my friend!

Various locations in the Triangle

Saltbox Seafood in Durham: A Simple But Fancier Take on Take-Out Seafood
Next Post:Arrow Haircuts- Raleigh and Pedro Williams- Durham for Great Haircuts!