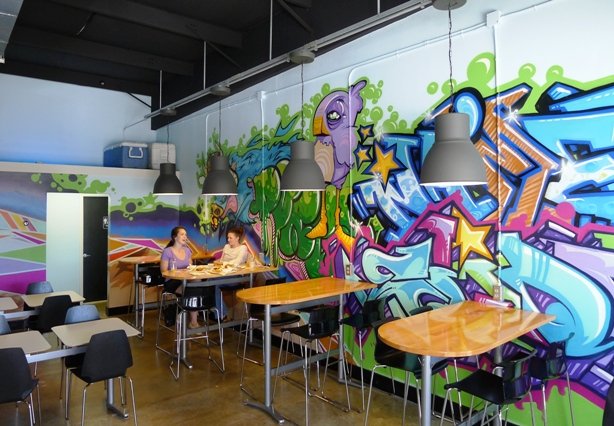 So when is a food truck not a food truck? When it moves into a bricks and mortar store-front like Ko Kyu Na’mean! Like other popular food trucks in the Triangle (Baguettaboutit, Only Burger), Na’mean is the first store-front for the very popular Ko Kyu. Known for it’s spicy fusion of ethnic flavors along with a bit of quirky irreverence, Ko Kyu had launched a Kickstarter to find a more permanent home in late 2013. Fast-forward to early 2015 and after a soft-launch, Ko Kyu Na’mean quietly opened up to muted fanfare. I had to stop in and check out their new spot, read on my friend!

If you’re headed out to Ko Kyu Na’mean, understand that right now they are only serving lunch Monday to Friday. This storefront is tucked away in the back of a quiet plaza, just look for their red and white sign next to the NC Beer store. When I arrive, the place is packed with sidewalk tables full of folks happily munching away on lunch.

Inside, the space has got that Ko Kyu food truck feel. Menu in black with press-on white letters, brightly colored graffiti walls and an old-school boom box overhead pumping out some classic tunes. The menu has eight or so sandwiches, a handful of sides along with some specials on a pinned up piece of paper. I’m here with my friends Lauryn and Rose so we spread the Ko Kyu love out and order up a bunch of items for sharing.

Up front at the Ko Kyu Na’mean counter you’ve got self-served drinks including a Julio orange and toasted almond horchata, yum! We get our playing card on a stand and grab a table in back. It doesn’t take too long for our food, maybe 15 minutes and it’s served casually on aluminum plates. We’ve got two short-rib sandwiches, a chicken sandwich along with pork belly (Pressed short rib, baht mi, ko.f.c and belly banh). Sides of furikake potato chips, kimchi cucumber, cream of broccoli soup and a ginger-roasted broccoli-cauliflower accompany our mains. As you can tell Ko Kyu owner Flip, likes to get a bit creative and playful with his menu and space!

As we dig into the meal, I’m reminded of how long I last ate at Ko Kyu food truck and you’ve got the similar mix of ethnic flavors (Mexican, Asian) that Ko Kyu is known for.  Short rib is a popular item for them and it shows off well in the panini and baht mi which is blinged out with peanut sauce and sriracha butter (very Thai).

The soup has some crumbled bacon on top, delicious and I love the kimchi cucumber which reminds me of a northern Chinese dish. The belly banh looked delicious but it didn’t quite do it for me which was odd since I usually love pork belly and banh mi. And boo, but I didn’t make it to the fried chicken sammich!

Flip comes out later and offers up a taste of his pozole (spicy hominy soup) which is excellent and looks fantastic with a radish slice on top. With all this food, we needed to digest and caught up with Flip and his work with Ko Kyu over the past year. This space had been part of the kitchen canteen for his two food-trucks and they had finally taken next steps to open it up for the rest of the store-front. And he had done a soft-opening (super quiet) to work out the operational kinks and make sure he could deliver on his food expectations.

So it was a great lunch visit to Ko Kyu Na’mean especially when I got to share the meal with two Ko Kyu first-timers. With the Ko Kyu food trucks and their new storefront you’ve now got three options to try out their spicy deliciousness. I would love to see Ko Kyu become the equivalent of the East Side King food trucks out in Austin! Congratulations Flip on taking it to the next level and stop on by if you’re up for some salacious and sumptuous eats, sandwich-style…