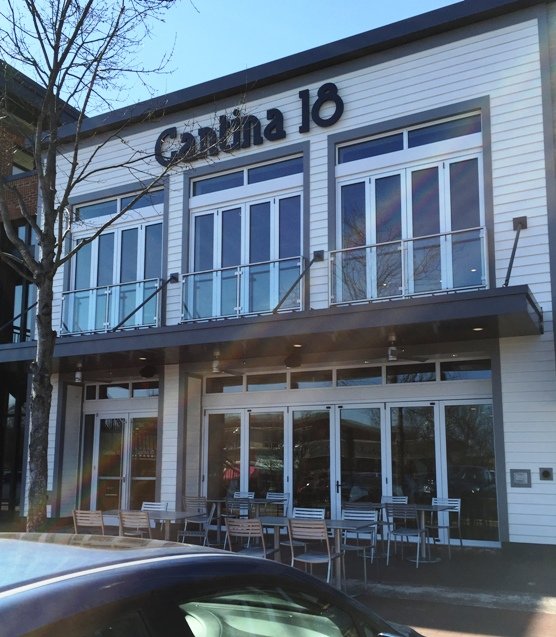 When is Mexican food not Mexican food?!  When it’s Southwestern food!  That’s what Cantina 18 bills itself as, a Southwestern eatery.  But if you look at the menu you’ll find all your usual Mexican faves albeit with a twist.  Given that Cantina 18 is part of the restaurant group run/owned by Chef Jason Smith, you’ll find some gourmet touches throughout the menu.  But that’s not always a bad thing, so let’s dive into a meal at Cantina 18! It had been years since I had last been here but I’m glad I was able to get back for a re-visit…

Given that Cameron Village can be tricky to navigate, you need to keep your eyes peeled for Cantina 18’s sign sporting red and green in the middle of the plaza.  On the outside they’ve got a nice sidewalk patio like most of the Cam Village restaurants and inside it’s padded booths, a bar and some festive Mexican decor.  Tonight we’re sitting outside and thankfully Cantina 18 has a house margarita special running on Monday’s.   We start off with a nicely pan-fried chicken quesadilla that comes with some Southwestern slaw, sour cream and salsa.  Nicely done and a bit lighter made with white cheddar.  The salsa brought to the table is light, mostly pureed tomatoes and then there’s a carrier full of hot sauces to spike the salsa with some heat.  While I like the idea of DIY salsa, I actually prefer the pre-made type for easier eating.

For my main I order up a couple of tacos: short rib and shrimp which comes with some beans and slaw.  Typically I pay about $3 per taco so definitely the eats here at Cantina 18 are on the high side.  But I can say that you go do get more here in terms of ingredients and presentation.  The shrimp taco is laced with mango while the short rib has a smattering of corn and chipotle cream sauce, both were delicious.  The beans were fine and while the red slaw looked interesting visually, it was not that tasty to me.  My friend’s queso with beans also looked pretty delish.

Service at Cantina 18 was good and pretty deliberate.  They had a trainee on hand whom was pretty enthusiastic and attentive.  Overall I can say I enjoyed my meal at Cantina 18 and will try and get back for a second meal.  While my instincts are to do a more authentic taqueria, there’s absolutely nothing wrong with the food here and its proximity to Cameron Village and home make it a no-brainer.  So rock on Cantina 18.  Even though you’re doing Southwestern eats with the emphasis on the Southern part, it tastes mostly like Mexican to me which is a good thing…