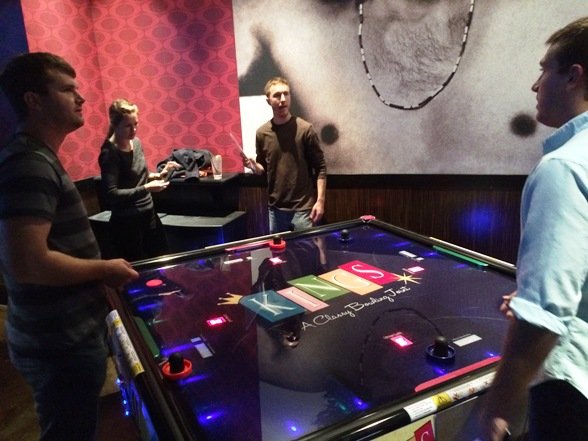 A Visit to the New Kings Bowl North Hills for Charity, Fun and Good Food!

I gotta confess, I’m not a very good bowler.  Maybe because I grew up in New England where we would throw these little balls at little candlepins instead of what the rest of the country uses!  So I was not a frequent visitor to the departed Sparians bowling alley up in North Hills.  But recently I heard that a small chain of upscale bowling alleys called Kings and based out of Massachusetts was taking over the venue and refreshing it.  And yes, they had a charity event called Kings Cares on the calendar so I figured it was a perfect time to visit and see what up at the new Kings Bowl at North Hills!

From the outside, Kings is pretty unimposing and plain, located at the side/entry along Park at North Hills Street.  The staff was already out front checking ID’s and getting people ticketed for the event.  “Woody” their mascot bowling pin was out front for pics and yes, I’ll try not to make any naughty jokes about his name as much as I want to.  Inside we paid our charitable donation, got three drink tickets and we were off to have some fun!  Kings Bowl was well-staffed and probably in shake-down mode with limited hours.  I’ll be interested to see what final pricing is like and if they’re able to nail down a better wait queue/bowling operations since wait-lines at the old Sparians was a huge part of its demise.  The entry-way seems a bit more open with a traditional counter to request a lane and grab your shoes which I already see as an improvement from the old place.

Straight forward you’ll find the first bar and 8 or so lanes and to the right you’ll open up to the main Kings Bowl area!  Another bar decked out in crimson, two gaming areas and then another set of lanes in back.  The overall space seems opened up and better laid out.  You can see people and activity all around which gives the place a more energetic feel.  Inside there are definitely some changes in the space, but some of the old neon remains, enhanced with the Kings Bowl starburst theme.  There’s also a modern retro feel with prints of Jeff Bridges as the Dude from the movie the Big Lebowski, very kitschy and cool!

We first head off to the front bar where Kings has a shorter selection of craft beers, house wines and house cocktails.  Definitely lots of fruity on the cocktail menu, spins on classic drinks but I wouldn’t expect anything too fancy!  As the Kings Cares event started off, the staff came out with hand-passed appetizers ranging from fried mac n cheese, spring rolls, fried won tons, sliders, seared scallops and hummus.  Unfortunately, trying to stand and eat is pretty tricky so I forgot the food pics!  But suffice it to say, everything we were served was above average for bar food and enjoyable.

As the night wore on we moved to the fun and play side of the evening.  Things were livening up so we grabbed a lane for a couple of strings of bowling.  Very modern and high-tech scoring system, Kings does some really colorful balls and the pin set-up/machine is super fast making for much quicker play.  Just be aware that some lanes do not have markers and the lighting makes it tough to see where you need to put the ball.  And our lane had a tight approach meaning you had to shorten up your strides or roll your ball more quickly than usual.  So if you’re a serious bowler you might want to double-check before grabbing any lane.

In addition to the bowing, Kings has added quite a few additional games like foosball, shuffleboard, ping-pong tables, air hockey and even one quad air hockey table, cool!  The event had free games so I’m not sure how pricey they are but it was certainly a great diversion from bowling.  As the evening slowed down, we were brought out cake-pops and mini smores which was a great way to end the event!

All in all I can honestly say I had a really fun evening at the Kings Cares events and I think they are headed in the right direction.  If they can resolve lane reservations/wait times and keep prices within reason, I think this new version of hip and retro bowling will have some staying power.  Good food and lots of fun sounds like a winning recipe for North Hills and the families in the area. So welcome to Raleigh and the Triangle, Kings Bowl!  And maybe add some candlepin bowling for us ex-New Englanders?  I’ll even promise to “pahk my cah in a wicked good space” the next time I visit…