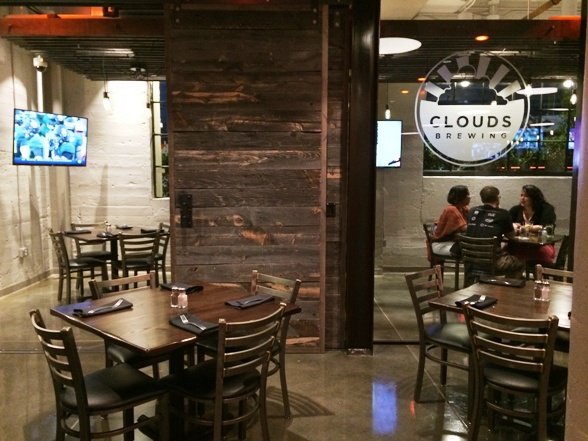 Clouds Brewing in Raleigh For Great Eats and Beer!

Clouds Brewing, Raleigh- The newest brewery in Raleigh shows off a self-serve beer wall along with good eats! Different and modern take on a brew-pub

I always used to be a huge fan of Napper Tandy’s in Raleigh since it was a reasonably priced place to get your Irish pub on.  With its demise and move last year to a new location on Glenwood, its old location was slated to be renovated and turned into Raleigh’s newest brewery and brew pub, Clouds Brewing.  And I’ve had the opportunity to visit this new bar twice so far and what a change!  No more dark Irish pub, hello modern brewery.  Definitely some things to like and other things, well some work is still needed at Clouds Brewing.   Here’s how it all went down.

From the outside, Clouds Brewing looks pretty unassuming with a small lit sign out front but once you open the doors, whoa!  Brightly lit and modern, Clouds Brewing has a lot of space.  Large dining/drinking room to your right, a long bar on the left hand side with some pub seating and then a side room.  Up front you’ll be greeted by a hostess which is your first reminder that you’re looking at more than a brewery.  The two times I’ve visited, I’ve always sat at the bar which is a good looking custom concrete top.  LED tube lighting surrounds the bar along with drop down Edison lights and red spotlights in the ceiling.  It gives the bar area an odd red-pink glow which takes a little getting used to.

Clouds Brewing is still months away from its own beers but they do currently carry a nice stock of drafts and canned.  On my Wednesday night visit they had $4 cans which I took advantage of with a NoDa Hop, Drop n Roll IPA which is a great deal at that price.  They’ve also got a self-serve beer wall, you just need to hand over a credit card and grab a wristband that automatically charges you as you drink, very techy!  Clouds Brewing now also has a pretty decent food menu of apps, salads, sandwiches and entrees which shows how ambitious the place is.  I’ve already had dinner so I order up their beer cheese appetizer just to give the menu a try.

When my beer cheese app comes out, I am impressed.  Two small portions of cheese with a quartered, sliced, toasted pretzel bun.  Some sliced bratwurst and sauerkraut, uhmm…  The beer cheese is super rich and creamy, a mix of cheddars and Yeti ale.  Dipping the pretzel bread in makes for a great cheese delivery vehicle!  If I were ambitious I could probably make some mini-brat and kraut sandwiches drizzled with cheese but not today!  Service at the bar was excellent for both personality and efficiency.

Ok, I admit to not being a big fan because I miss the old Napper Tandy’s but I think Clouds Brewing is doing a pretty good job so far.  Pluses: super modern and clean interior, good selection of beers, seems to be good food.  Minuses: rest of the staff seems inexperienced, odd red lighting and the lack of their own brewed beer.  And the crowd, yeah.  It seems a bit bro-tastic right now, more like your typical S. Glenwood scene which is typically not a fit for me.  But they’re still figuring things out so lets see how Clouds Brewing evolves.  I’ll give them 3 1/2 stars for now with a lot of room to go either way in my book.  I can see Clouds Brewing becoming a spot in my rotation or becoming the type of place I’d avoid.  And I’m not sure where they’re going to end up so I am very curious.  But nice job overall, Clouds Brewing!  You’re definitely different than anything else in the downtown Raleigh area when it comes to beer…