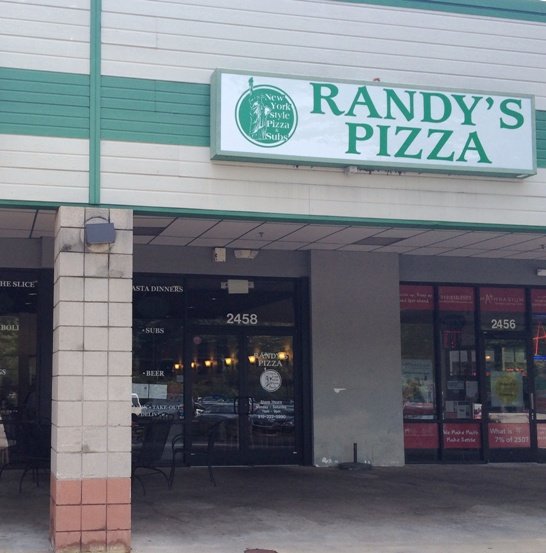 Randy’s Pizza in Raleigh For Big Ol’ Slices of Pizza!

Randy's Pizza, Raleigh- Looking for a huge slice of NY pizza?  Look no further than the super-popular Randy's Pizza!

I am a HUGE pizza fiend but oddly enough, wasn’t a huge fan of Randy’s Pizza.  Which is odd because this small local chain of pizzerias is super popular.  But it’s not because Randy’s isn’t awesome, they just happen to be mostly located in the suburbs of Durham and RTP.  Places I rarely hang out around.  As luck would have it, Randy’s Pizza finally opened up a Raleigh location off of Lake Boone Trail and it was time for a visit!

Outside of some delivery pizza and one visit to the S. Miami location, Randy’s was sort of a mystery to me.  This location in a small plaza off of Lake Boone Trail is sort of tucked away in the back, not too far from Chubby’s Tacos.  Inside, the space is long and deep with the order counter in back.  Randy’s is normally SUPER popular so they are laid out in a way to maximize efficiency!  I called in my order so it was pretty much ready to go when I showed up.  One 12″ veal parmigiana sub ($8.95) and the one slice special with garlic knots ($6.45) and drink.  We’re talking a ridiculous amount of food but since it was my first visit, I had to go a little bit overboard!

The combo single slice of pizza with garlic knots is a LOT of food.  The slices at Randy’s are ridiculously large and a very good example of thin-crust NY pizza.  (For scale, in the pizza pic above, that foil container is probably 8″ in diameter!) Some decent bite and chew to the crust with the garlic-laced tomato sauce makes it very tasty.  The garlic knots are well-browned, chewy on the outside but fluffy inside, yum!  And finally my veal parm sub.  Yeah, I probably should have gone with chicken but I couldn’t resist.  Toasted perfectly, it’s a large sandwich with two large, breaded pieces of veal and a nice covering of sauce and cheese, excellent!  Veal and chicken parm subs are one of those weaknesses I try to resist but every now and then its perfect.  And Randy’s does a good one.

Besides the food, Randy’s is known for its quick and friendly service which is absolutely the case here.  With the self-service drinks and cutlery at the end of the counter, you definitely get in and out in a jif.  So welcome to Raleigh, Randy’s!  I’m always excited to have another good pizza spot in the hood and thankfully you aren’t far from home.  Grazie for the great pizza and I’ll be back soon…