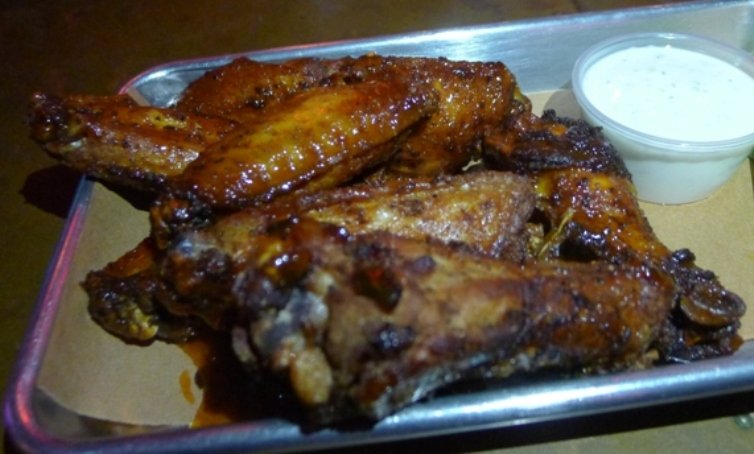 After all my New Orleans eats, I was in the mood for some que and spotted Blue Oak Barbeque on Yelp.  It looks to be in mid-City New Orleans, a bit aways, but then I realize the Canal Street rail line goes right by so it’s time for a trip!  I grab a car on the streetcar line downtown for a $1.25 and it’s a fun experience.  Crowded with locals, it feels a bit more real than what you usually run into on Bourbon Street.  The street car drops me off a 1/2 block away from the music venue Chickie Wah Wah, and Blue Oak Barbeque serves up the food inside.

Stepping into the club, I hear some live blue music wafting out. Inside it’s dark and lit with neon, an order counter on the right and a long bar down the left-hand side.  Friendly bartender greets me, points out Blue Oak Barbeque and sets me up with a gin and tonic to get things started.  It’s early, about 6:20pm so I’m not quite hungry yet but I see some others filter in and order up some smoked grub.  Chickie Wah Wah has an interesting crowd, I’m thinking mostly local.  Ages range from 25 to 55 so it attracts a diverse group.  The music is excellent as is usually the case in New Orleans and now I’m getting hungry.  The menu for Blue Oak is pretty small: pulled pork, brisket, ribs, smoked wings, chicken and sausage.  I’m trying to figure out how to try everything I want to try without exploding, phew!  I end up going with some nachos covered in pork and brisket along with eight smoked wings in rooster sauce.  About $10 for the nachos, $9 for the 8 wings which is very reasonable pricing.

As the blues music streams out of the corner, it takes a bit of time but my wings show up on a 1/4 sheet baking pan and they look good.  Darkened and slicked with the rooster sauce, they’re a bit crunchy on the outside but you can certainly taste the tender smoked chicken underneath. The sauce adds some light tang and sweet, very good wings.  While I’m nomming on the wings, my nachos show up and it’s dark so I can’t see exactly what’s going on.  But there’s a layer of chips covered in thick cheese sauce and bits of pork and brisket littered atop.  The chips are freshly made and nicely crunchy with a bit of grease.  I get 2/3 of the way through the tray but it’s an excellent mix of crunch, cheese and meat, a big thumbs up here.  Portion size from Blue Oak is generous, I could have split up my apps between two people rather than one little pig like myself.  Add in a sandwich and we would have had a meal for two, I feel bad for missing their ribs.

The plates at Blue Oak top out at $18 for the three meat version so everything here is pretty inexpensive for what you get.  Tie in the nice live music and excellent service from Chickie Wah Wah’s and you’ve got yourself a fun and affordable dining experience.  A side dining room also gives you the option of a quieter meal for conversation.  All I can say is rock on or maybe “blues on”, Blue Oak!  Loved your smoked meats and what you’re doing here, I wished I lived in town so I could come back for visit #2.  So until next time I’m in Nawlins, I’ll save some stomach for you…

Rue Cler, Durham For a French Bistro Feel and Fare
Next Post:Randy’s Pizza in Raleigh For Big Ol’ Slices of Pizza!