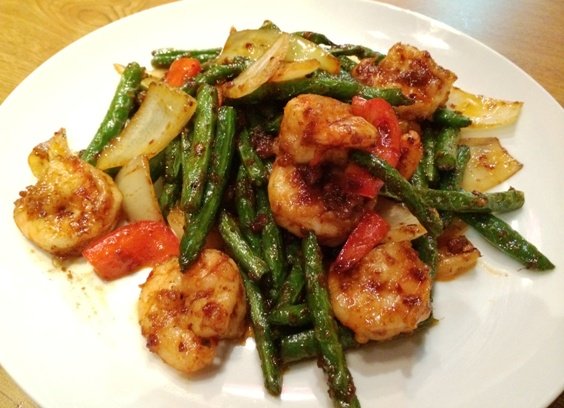 Red Pepper Asian, Raleigh- A tasty mix of Chinese, Thai and Malaysian under one roof.  Choose from shrimp sambal, pad thai and more...

Way back when, there used to be a Chinese restaurant called Fortune Palace on Capital Boulevard.  Located in a dingy strip mall, Fortune Palace was a mix of Chinese, Thai and Malaysian and always seemed empty.  Three months after I discovered the place it closed down. And then depression set in…  It was one of the few places I knew in the area, where I could get Malaysian eats and those delicious roti. Fast-forward to 2014 and I hear that the owners of the old Fortune Palace have opened up a new place named Red Pepper Asian.  So yeah, like a moth drawn to light, it’s time for an eating road trip!

East Raleigh is an area I really haven’t explored much and finding Red Pepper is a bit of a challenge.  Located in a large, deserted strip mall and set back pretty far in off the road, you’ll find them in the back corner of a partially populated section.  Red Pepper Asian is a tidy looking space, cafe decor but certainly warmer than the old Fortune Palace.  When I step inside, the two ladies who run the place are eating dinner and I’m feeling a bit guilty about interrupting their meal.  I get a menu and order up some hot tea, there no wine or liquor here.  I ask the ladies about the Malaysian dishes and unfortunately, there’s only a handful of those dishes scattered throughout the mixed menu.  So I order up some chicken wrapped in paper, Singapore rice noodles and a Malaysian shrimp with string beans.

The restaurant is empty which is pretty sad.  I nearly feel guilty making them cook up dinner for me but I spent half an hour trying to find Red Pepper Asian so I’m all in now!  About fifteen minutes in, they bring me my paper-wrapped chicken app.  Now if you haven’t had paper-wrapped chicken, let me explain.  Typically it’s a piece of breast meat with some marinade, spices and scallions that’s either deep-fried or baked.  But what you get is a super-tender, browned piece of poultry with tons of flavor!  And while the paper-wrapped chicken here at Red Pepper is actually foil-wrapped, it’s still delicious and great with the honey-mustard dipping sauce.

Soon my main’s come out, some Singapore rice noodles (light curry, chicken and shrimp) along with Sambal string-beans and shrimp, Malaysian style. Both were solid, the Singapore noodles weren’t greasy at all and very tasty.  The shrimp and string beans reminded me of dry-fried Szechuan string beans with large shrimp and definitely more spice.  It brought out some sniffles from me, both portions were substantial.  I probably ordered enough food for nearly three people but since this was my first visit, I went overboard.

The final tab came out to about $30 and about $37 with tip which isn’t bad for the food I had.  Certainly Red Asian is dishing out pretty authentic eats although I am a bit bummed that there isn’t more Malaysian on the menu but I have to believe it’s a pure business decision.  And I am definitely glad to have another place for authentic Asian eats in the Raleigh area.  I’m not sure when I’ll be here next given the distance but if you live in E. Raleigh, you can certainly do far worse than Red Pepper Asian to get your spice on!  Just don’t let the location or quiet space throw you off, the food is worth it here. Bon appetit!

The Durham Performing Arts Center (DPAC): A Live Performance Gem for the Southeast
Next Post:Taberna Tapas, Durham for Rustic and Real Spanish Fare