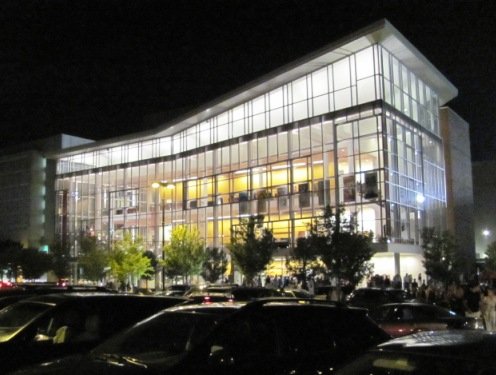 The Durham Performing Arts Center (DPAC): A Live Performance Gem for the Southeast 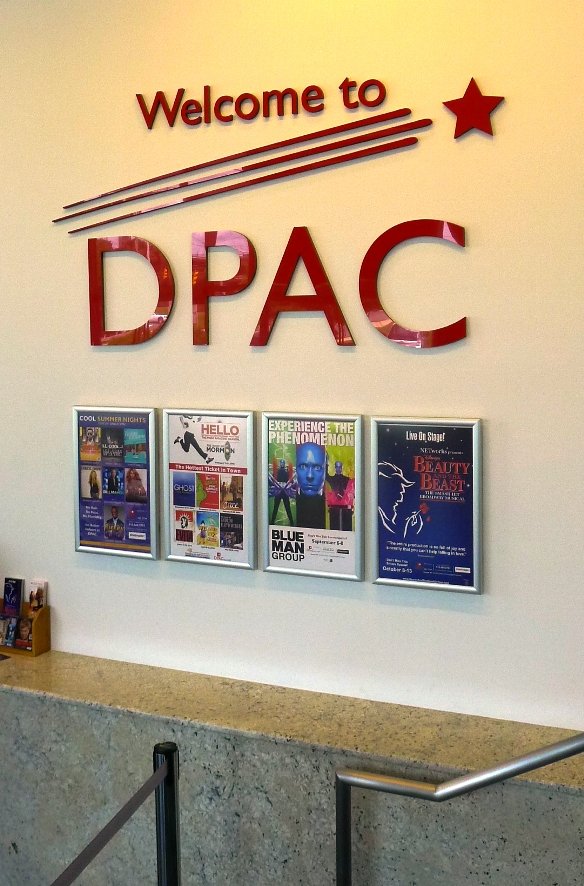 There’s nothing that gets me more excited than a great live performance.  A good concert or Broadway show gets my proverbial tail wagging! From theater to music and more, seeing performers live and up close gives you a real understanding of all the work that goes into a production.  And on the right night with the right show, you leave your seat with a chill running down your spine.  And thankfully for those of us in the Triangle, we have one of the best performance venues around: the Durham Performing Arts Center or as more fondly known, the DPAC.

Opened in 2008 at a cost of $48 million, the DPAC has been a key part of downtown Durham’s revival over the past five years.  With a seating capacity of over 2,700 patrons and a busy show schedule, the DPAC consistently ranks near the top, nationally, in terms of attendance.  Which of course means all these great restaurants and bars are needed in the neighborhood! 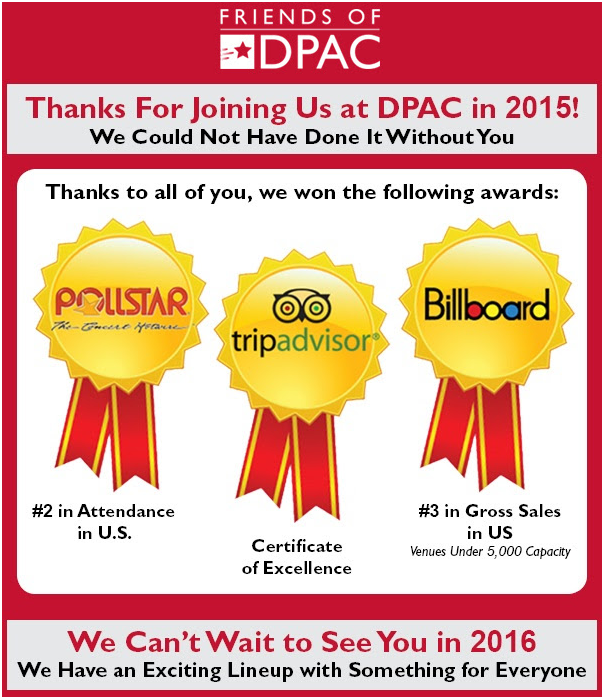 The DPAC’s Broadway series has brought top-notch shows from NYC ranging from Phantom of the Opera, Wicked, and Mamma Mia along with new favorites such as Book of Mormon.  And as a previous season-ticket holder, attending DPAC shows was what really introduced me to downtown Durham. But in the end, DPAC’s success has been very much earned by providing a stellar performance venue from both the guest and performer standpoint.  And if you haven’t been there yet, you really need to get there for a show.  Here’s why… 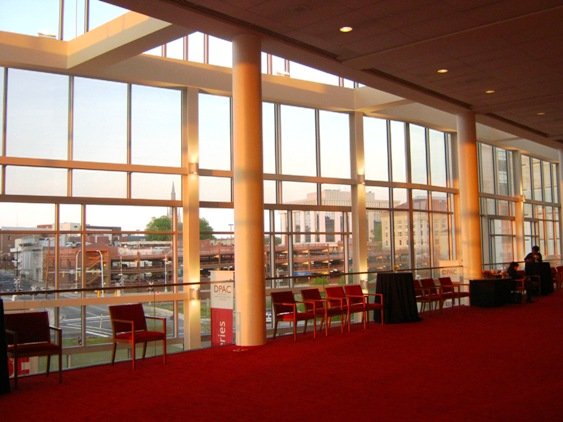 From the outside, DPAC’s lines are esthetically clean and simple, very Scandinavian in look and feel.  Lots of glass, white members and a slightly curved and organic shape gives it a nice presence.  But when the sun goes down and the lights inside are on, DPAC glows like a beacon in the night beckoning you inside.  The rich, red carpeting projects a rich feel without being stuffy or overbearing.  Staff in red tailcoats and top-hats greet you inside and everyone is impeccably trained.  I’ve never met a rude employee at DPAC over the past 5 years and probably 25 or so shows I’ve gone to.  With three floors, the interior is subtly decorated with blonde woods for warmth.  Grab a beer or snack from one of the main concessions stands or one of the bars/vendors scattered on each floor. Drink and food prices are also reasonable, you can bring it into the seating area.

Once you step inside of the DPAC seating area, you’ll see you’ve got perfect line of sight to the stage from every angle and seat.  I’ve sat in 4th row orchestra all the way up to the back of the balcony and it’s still a good experience.  Yeah, it’s always nice to be closer but even the “cheap” seats are solid.  Audio and acoustics are also quite good at the DPAC for the Broadway shows and music performances.  So overall, you’re going to get a premium experience, now it’s just up to the performers. 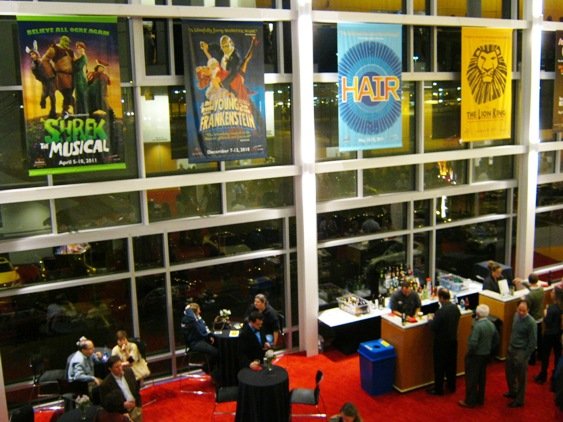 Typically at the show intermission, it’s easy to get out to the men’s and ladies room, the staff will hold up a sign for the women signifying the end of their line.  Soap and towels are stocked well and even in the short 15 minute intermission, I’m able to get cleaned up and a snack or second glass of wine for the rest of the show.  And after the great performance is over, getting down the stairs and out usually takes under 15 minutes which is efficient.  Right next door you also have the lovely American Tobacco Center for an after-show drink or bite, perfect!

And during the DPAC Open House, I had a lot of fun checking out the DPAC from the performer perspective.  It was SO cool to stand on the stage, check out all the staging and prop equipment and poke around the changing rooms in back.  The murals and signatures left behind by each performance group is uber-cool to check out, I highly recommend you check out their next Open House if you get an invite. 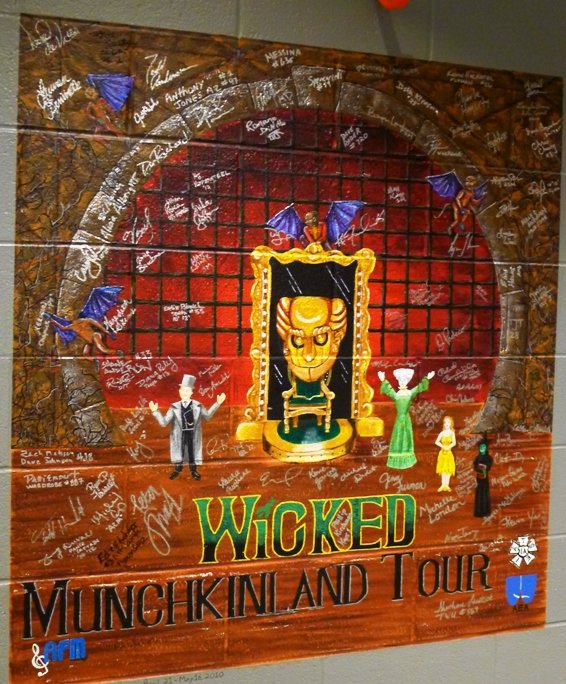 So thanks so much Durham Performing Arts center for helping me get the most of my entertainment dollar over the past five years.  I can’t count the number of great evenings I’ve had with you and I know it all happens because of all the tremendous and hard work you perform on the back-end.  Here’s to more and better from the DPAC, I’m already looking forward to my next visit…

Best Restaurant and Dining Deals around the DPAC in Durham, Part I (Walk to DPAC, Mangum Street)

Best Restaurant and Dining Deals around the DPAC in Durham, Part III (Closest to DPAC, ATC)

Best Bars and Cocktails Around the DPAC in Durham