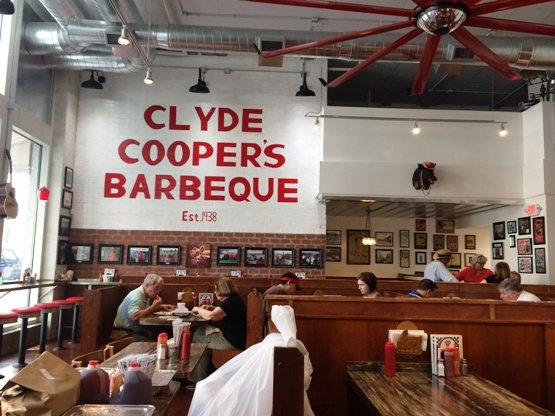 Clyde Cooper's Barbeque, Raleigh- This refreshed Southern barbeque joint still puts out some solid pork and sides for not much money

Ok, I’m totally just kidding about hipster but it’s all relative when you’ve been around for 76 years!  I remember going into the old Clyde Cooper’s and loving how it was such a throw-back experience.  But moving to a new location in April 2014 had me wondering what the place would be like.  And I’m very happy to report that Cooper’s is alive and still dishing out its great eats but in a refreshed space.  Located around the corner from the original E. Davie spot, Coopers has brought over a lot of the charm and decor to a spot on S. Wilmington next to the municipal parking lot. It’s odd to look at the modern, glassed front and think, “This is Coopers?!”  But yeah, once you step inside, you’ll get it.

Step through the doorway and you’ll immediately see the glassed counter that holds the cash register.  You’ll see a modern stainless steel diner counter but overhead, hey there’s the old green awning that used to set out front!  On the left-hand side you’ll see a freshly painted version of the Cooper’s Barbeque sign and the staff is now wearing t-shirts for a bit of casual.  But the space is large, has high ceilings along with a big ol’ ceiling fan and back dining room with mason jar lighting overhead.  I grab a seat at the counter since I’m dining solo and its time to eat.

Not surprisingly, the menu hasn’t changed at all.  I get the combo plate of que, baby back ribs along with two sides (corn-butter beans and potato salad) since I’m excited to eat at the new Coopers. Looking around the room, it looks like the place hasn’t missed a beat.  Regulars and newbies enjoying some traditional smoked meat.  Even with the refresh, Cooper’s feels a bit retro.  I get my plate of eats: pile of barbeque, two pieces of baby back ribs and my sides.  The barbeque is good, probably not the best in the area but worthwhile.  And the ribs are a bit small but I catch the smoky flavor inside, some sweetish sauce burnishing the outside.  The potato salad is fresh but a bit heavy on the mayo, while the beans-corn is decent.  I’m enjoying myself so much, I add on a side of banana pudding to end the meal.

On the way out I pay up and it’s about $11 or so, quite the deal.  Toss in two pig’s ears for the dogs and everyone’s getting fed today!  All-in-all, if you were a fan of the old Clyde Cooper’s Barbeque, I’m pretty sure you’ll be a fan of the new one.  Same food, bigger space with more light.  And while it may not have that old-school feel in the decor, the spirit remains the same.  Friendly folks dishing out good que at a great price.  Yep, it never hurts to have a classic eatery like the Mecca or Clyde Cooper’s Barbeque around to go with the fancy-shmancy places.  So congrats on the quick move, the new space and the same great eats, Clyde Cooper’s!