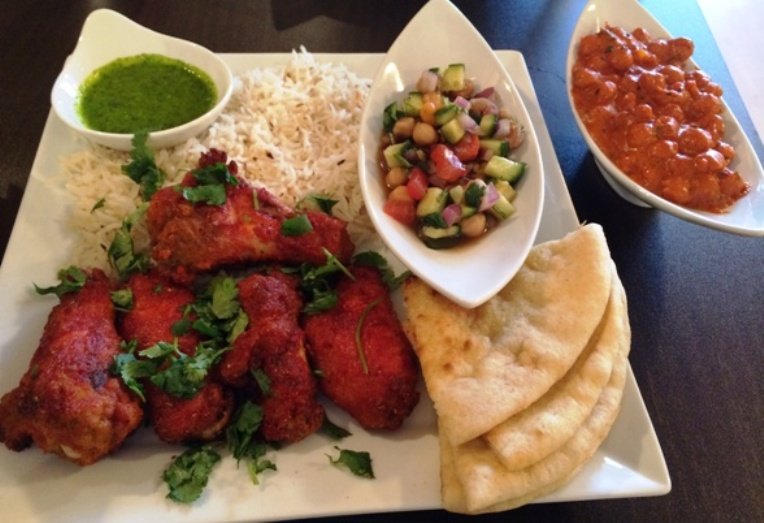 Cilantro Indian in Cary Grows Up But Still Dishes Out Delicious Eats!

A while back I had reviewed Regency Kitchen, a little take-out Indian eatery at a gas station that surprisingly served up really good ethnic eats.  Given how close it is to my workplace, it quickly became a regular part of my lunch rotation.  Fast-forward to 2014 and looks like a lot of other people agreed with me because that little gas station Indian cafe has moved up in the world to MacGregor Village as Cilantro Indian Cafe!  Losing their great Indian food for two months while they moved had me craving it even more so you can bet we were ready to eat right after they opened on February 28!

Cilantro Indian Cafe is located in a quiet spot of MacGregor Village on the left-hand side of the plaza.  At the entrance you’ll find a bright green archway leading to their order counter.  First thing you’ll notice is that the place is B-I-G, big!  Large open tiled space, four tops around the edge and even a second floor for increased capacity.  But even with all this space, Cilantro is still an order at the counter, casual spot.  Prices on the menu seem mostly the same at about $9 per entree and I go with my usual tandoori wings with Moroccan hummus.  Grab a number, grab a drink and then grab a table.  The food here does take some time but at least you know it’s fresh.  The owner (Mustafa) says they are working on ways to improve service speed which will be important given the number of tables they have.

Our food arrives on a silver platter in white, modern ceramic dishes.  Everyone’s food looks great!  We’ve got a saag paneer, and chicken tikka masala along with my meal at the table.  I’ve got five wings, a serving of the hummus, basmati rice, four squares of naan and a cold salad starter (cucumber, chickpeas, red onion, basil, cilantro) which I think is chana chaat salad.  The starter is excellent bursting with citrus, herbs and flavor, wonderful stuff.  The tandoori wings are coated in a thick, red spicy rub and as delicious as I remember it.  Paired with the spicy Moroccan hummus (like chickpea tikka masala), I get to sniffling but it’s all good.  Cilantro has always been on the higher side with their spicing and heat so if you’re sensitive to spiciness be careful.

All I can say is that I’m glad to have Cilantro Indian Cafe back in business and feeding the Cary area their spicy deliciousness!  I need to explore the menu some more but I think their food can compare with the better known Indian restaurants in the area but in a different way.  Cilantro reminds me more of the hole-in-the-wall type Indian places I enjoyed in SF so if you’re willing to forgo the fancy silverware and table cloths, I think you’ll be happy.  The only thing that’s really missing is fresh-baked naan which I believe is key to any good Indian restaurant.  I do know that they currently don’t have plans to do a lunch buffet so don’t get too hopeful there.  Otherwise I can fairly say that Cilantro Indian is a deliciously, spicy casual meal that warrants making an effort to eat at.  So welcome back, Cilantro!  We certainly missed you…

Tazza Kitchen in Raleigh for Great Pizza and Small Plates
Next Post:Al’s Burger Shack in Chapel Hill For Great Burgers and Fries…