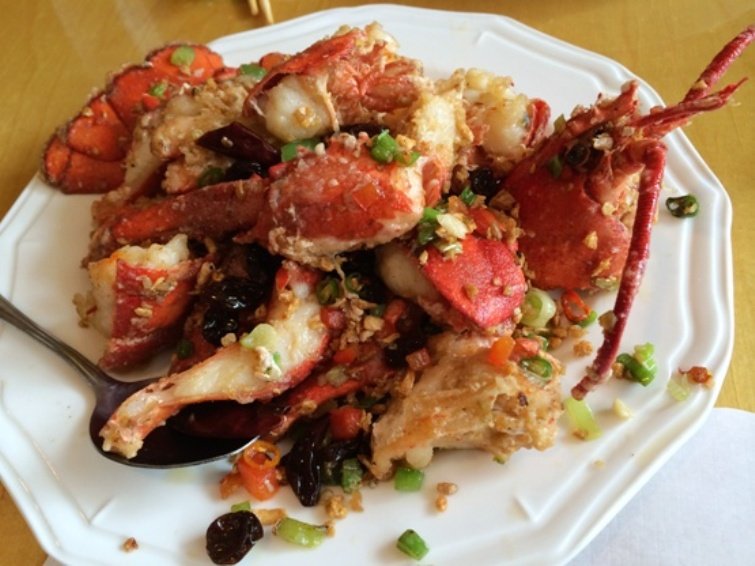 I’m usually the first person to complain about the dearth of authentic Chinese food in the area given I sort of grew up on that type of food.  So it was welcome news to hear about the opening of Banana Leaf in Cary by Cary Towne Center. I heard it was a mix of Cantonese and Malaysian and a friend had stopped in and thought it was decent. Thankfully he was up for a second visit so off we go for lunch!

We pull into the busy parking lot on a cold and rainy afternoon. Up front there are plastic signs, the old Bombay Beijing signage has yet to be pulled down so don’t miss the place. Stepping inside, Banana Leaf has a warm and cozy feel to it. Nice, blonde hardwood floors, canary yellow walls and clean.  The space is much larger than I expected with two main rooms and a couple of counter/register areas. We get seated on a raised platform (watch your step) in a booth by the window, prime seating! I had read about the lunch specials which are a great deal at $6.35 so we start looking there.  They also were running a lobster special (ginger-scallions or Hong Kong style) for $13+ which also caught our attention.  I went with the fish filets with spicy-sour sauce and we put in a shared order for the lobster Hong Kong style (and I really had no idea what that meant)!

Banana Leaf was a busy already, large table of senior citizens in the main room and a smattering of lunch tables full.  Which is a great sign given they just opened up.  Our salad and egg roll comes out first, it’s a basic green salad with ranch. Simple and not that exciting but for $6.35, who cares?  Our mains follow and I’ve got a large portion of battered and fried fish in a slightly gooey sauce. Pieces of green, red pepper and onions complete the dish along with a large scoop of white rice.  It’s a lot of food and the fish is decently fried.  Not a huge fan of the sweet and sour sauce, I was expecting something a bit more subtle.  But fine for lunch.  The lobster is place in front of us in a large oval plate.  The lobster is chopped and stir-fried with scallions, garlic, pepper bits and raisins.  There’s a light savory coating on the pieces but I’m not sure exactly what.  For the price it’s not a bad deal but I’ll be honest in that I’ve never seen this dish done with raisins.  And even the peppers were a bit different but overall it was a decent meal.

Service at Banana Leaf was very attentive and polite, on the way out we were thanked by several people including the owner.  So super nice and I’m appreciative of that extra attention.  When all is said and done, I think Banana Leaf is trying to do authentic Cantonese food at decent prices.  But it’s a different presentation and preparation than I’m used to, it feels like just a little bit of a twist on the traditional Cantonese cuisine that I’ve eaten so much.  Not to say it’s bad, Banana Leaf is solid but I think it’s going to take a return visit to really figure out what they’re about.  And that’s fine by me, I’d have no problem coming back to Banana Leaf for another meal.  I’m pretty sure they can keep you happy if you’re looking for a slightly more authentic Asian meal.  Thanks for the eats, Banana Leaf!

Pompieri Pizza in Durham for Pies with a Southern Twist…
Next Post:Pho Vietnam Brings Some Asian to the Raleigh-Cary Area