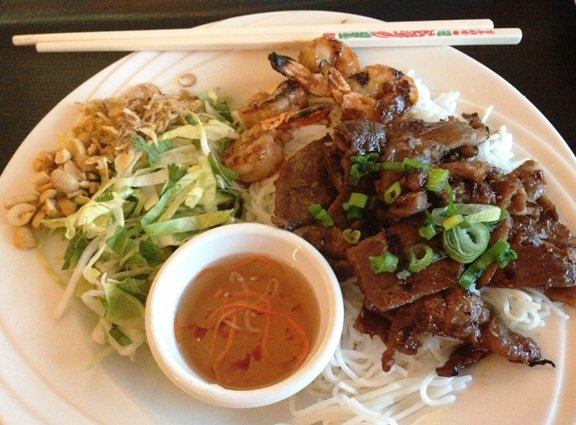 Taste Vietnamese, Morrisville- A solid rendition of your traditional Vietnamese restaurant in RTP!  Choose from noodles, rice, sandwiches and more

“Turn left on Wade Ave and take a right on Dixie Trail” said my iPhone.  But no, I was trying to get to Taste Vietnamese out in Morrisville, not Taste in Raleigh!  Punched in some new data and off I go, eventually showing up at the old Mawa’s restaurant.  In its new remake as Taste, some of the old colors and decor remain but the new Taste is all about the spice and flavoring of Vietnamese cuisine, one of my favorites.

I grab an open booth by the window, Taste Vietnamese is a casual cafe with plenty of open space.  Bright hued paint on the walls large counter up front along with some plate glass windows, probably some remnants from its previous incarnation as an African restaurant.  A quick check of the menu and it has all the Vietnamese standards:  rolls, pho, banh mi, com (rice plates), bun (noodle bowl) along with some other entrees and bubble tea, cool!  A slightly shorter menu than what I’d typically find in a down-home Vietnamese eatery but plenty enough to choose from.

I order up some summer rolls along with grilled pork-shrimp bun.  They’ve got some beer here at Taste (Corona and Heineken) which makes the waiting a bit easier. My summer rolls show up first, two smallish, tightly wrapped rolls.  Some people call VN summer rolls a salad roll because they are filled with cold noodles, mint, lettuce carrot along with some shrimp and pork.  Taste’s version is decent, not outstanding but definitely fills the need.  My bun plate shows up which is a bit odd.  I’ve eaten a LOT of Vietnamese over the years and it’s typically served in a large open bowl, so yeah it’s different.  Taste-wise, the bun here is pretty good with nice grilled-charred shrimp, tasty pork which contrasts against the cold, noodles.  A great dish for the summer but I’ll admit that Taste’s version was a bit off for me.  The noodles were a bit thicker, broken into smaller pieces and a bit wet which made for tricky eating with chopsticks.  Typically the noodle for bun is a not that wet and cooked at full length which makes for easier pick-up with chopsticks.  The texture of the noodles here was more pasta-like which may be another nod to a more Americanized palate.

When all is said, I do like Taste Vietnamese.  It does a decent job with the flavors of Vietnam but just misses a bit in small ways.   However, since I live about 2 miles from Pho Far East, it would be hard for me to find a reason to eat here again unless I was in the area.  But for those of you in the hood, give Taste Vietnamese a try if you’re up for some flavorful Asian cuisine!

The Beauty of a Rustic Pastry Lesson at La Farm Bakery, Cary
Next Post:First Take: Snoopy’s for a Classic Chili-Dog and Grill Experience!