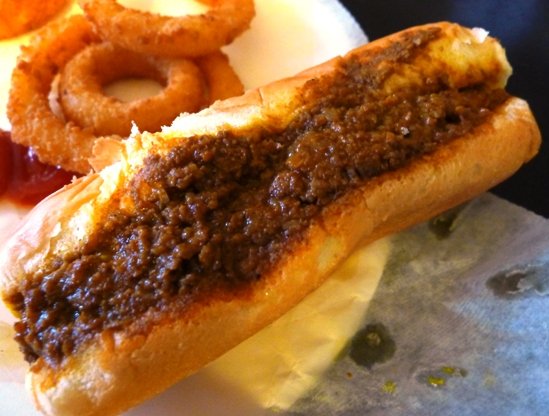 First Take: Snoopy’s for a Classic Chili-Dog and Grill Experience!

Snoopy's, Raleigh- A classic hot dog stand for dogs slathered with chili and mustard! And don't miss out on their onion rings and chicken salad

Snoopy’s is about as much about old-school Raleigh as its next-door neighbor, Char-Grill.  But while both are known for their late-night grill munchies, Snoopy’s does it hot doggie-style!  With several locations in the Raleigh area, my local favorite is out on the corner of Hillsborough and Glenwood Avenue, perfect after a night out on the town…

Parking at this little red building can be a bit tight but thankfully, Snoopy’s is walkable from a lot of the activity on S. Glenwood.  Small overhang with two service windows, Snoopy’s does a lot of basic grill items ranging from burgers, dogs and chicken tenders along with barbeque and chicken salad sandwiches.  My usual order is a couple of dogs with everything on it and their popular crinkle cut fries.  Unlike Char-Grill, the service here at Snoopy’s is fast, you’ll usually get your order within 5 or so minutes in a little paper bag.

The dogs at Snoopy are wrapped up in white butcher paper and given the buns are steamed, it’ll sometimes stick to the paper as you’re unwrapping your meal!  Two long-ish dogs slathered with meaty chili, covering some mustard, yum.  Take a bite and you’ll get hit with a lot of savoriness and the underlying tang of mustard.  They’re pretty filling so I’m guessing two or three will fill most people up.  The fries here are probably frozen but well-cooked with just the right amount of crinkle crispness and potato.  The onion rings at Snoopy’s are also really tasty and worth sharing between two people.

When most people visit Snoopy’s, they do the $6.44 special of two dogs, fries and drinks which is reasonable but not a fan-tastic deal compared to say, Cook Out.  But if you hit up Snoopy’s on Tuesday’s for Dollar Dog days, you’ll do much better.  While the food at Snoopy’s is really basic, it satisfies some odd and weird underlying food cravings in me.  I mean I know the food isn’t good for you but who wants to live forever?  So don’t miss out on this little red hot dog stand at the end of Glenwood.  You may not feel great in the morning but you’ll be thankful you stopped by for at least 15 minutes…

Taste Vietnamese in Morrisville
Next Post:A Trip to the Daily Planet Cafe and NC Museum of History