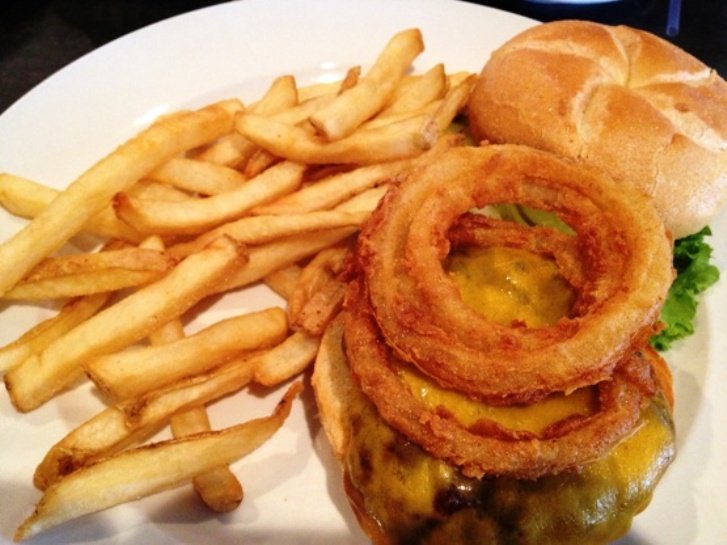 I don’t know too many people who would turn down a good beer and some fattening pub food because simple, hearty fare is sometimes exactly what the doctor ordered.  And that’s where the MacGregor Draft House come into play!  Located in the MacGregor Village shopping area off of Tryon, the Macgregor Draft House (heretofore known as MDH) is a bit bland inside, the standard corporate pub interior with a front dining room and a back bar room separated by an area to toss darts.   Both times I’ve eaten in back at some hi-boys.   The menu is pretty standard: pickle chips, wings, nachos, burgers, sandwiches and some heavy entrees.

The place is usually busy and both times I’ve eaten here, I’ve sat in the back room.  Service is quick and efficient, great when your time is tight for a meal.  Probably my favorite app is the pickle chips, a heaping plateful of thin-cut pickles with a light but greasy coating.  Served up with some ranch on the side, it’s a great starter.  The burgers at MacGregor Draft House are also solid, a thick patty cooked just right, I had mine with BBQ sauce, cheddar and onion rings.  The sauce was neatly tucked away underneath the burger and it was a solid sandwich.  The beer selection here is decent.  Maybe not quite as extensive as say, Tylers but above-average.  Overall I think MacGregor Draft House is an ok choice if you live in the hood and want a casual meal with a fresh beer. But Tyler’s Taproom is only a mile or two down the road so I’d end up there most of the time over MacGregor.  So what can I say but if you live in the hood, give ’em a try for lunch or a quick beer after work!