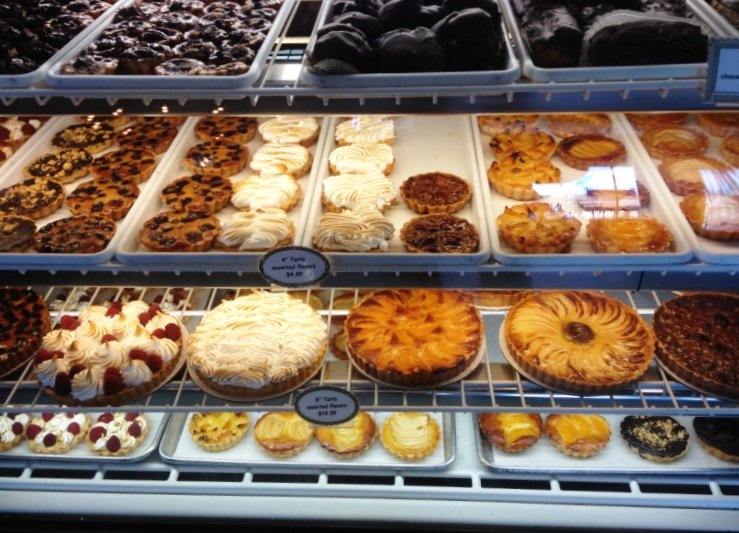 From Lie to Le, Amelie’s Bakery and Le’s Vietnamese in Charlotte

Now I can’t imagine two eateries being any more different but during my last visit to Charlotte, I stopped into two great places for foodies, Amelie’s French Bakery and Le’s for Vietnamese sandwiches!  Don’t ask me why, I was just a little bit hungry.  And let’s just say they are both very special spots but in entirely different ways.  Cause there just isn’t much in common between the two other than that you’ll be leaving both with a very happy stomach.

Out on N. Davidson is the wonderful, fabulous, delicious and altogether amazing Amelie’s!  The boring brick exterior hides greatness behind the front doors.  Step inside and you’ll immediately catch sight of a cool light fixture festooned with measuring cups and pots.  A glance further in and you see two large cases holding all these wonderful, colorful sweets.  Brownies, macaroons, eclairs, napoleons and more, you really have to cycle through all the possible pastry options before settling on one favorite.  Or maybe two.  Grab a cup of coffee (self-serve) to go with your sweets and go find a table in back so you can settle in and enjoy it all!  Amelie’s has a wonderful side room decked out in bright, colorful faux Baroque-type pieces.  Chandelier, fake fireplace, heavy gold-gilt picture frames along with some worn couches.  Thinks hipster, shabby chic a la orange or in a knock-off French theme.  The place attracts a hip crowd as you can guess and lounging or studying at Amelie’s seems like a wonderful way to blow an hour or two.

But what about the treats?  All I can say is the salt caramel brownie may be one of the top five food items that’s been in my mouth.  A decadent blast of soft chocolate, thick creamy caramel with a hit of salt, wow!  I’ve also done their lemon-raspberry and pecan tart which are luscious, creamy and backed with a thick, buttery crust.  Tie in some excellent coffee and you’ve got yourself a great mid-afternoon or late-night treat at Amelie’s!  You really can’t get much luxurious than this for under $6.

Now after I had my sweets at Amelie’s, yeah I figured I needed some savory so I head on over to Le’s off of N. Tryon Road. Located in a seedy, run-down strip mall, you definitely have to make an effort to find the place!  Funny thing but there’s an Asian plaza JUST like this one in Raleigh so I felt right at home.  Le’s is like a beacon of light in this dreary space.  Brightly lit, clean, they only do one thing here but they do it really well, Vietnamese sandwiches.  I order up a meatball and roast pork banh mi which will take a bit of time to put together, fresh.  There’s a small upright cooler with drinks, a couple of chairs and that’s about it here!  10 minutes later my sandwiches are done and at $3.50 a piece, quite the deal.

FYI but you can get Le’s sandwiches in both short rolls or long, thin rolls which to me are more traditional.  I’ll confess to not eating the sandwiches right away (due to my snack at Amelies) but they were both quite good later on.  Light, fresh roll, stuffed with lots of pickled veggies and cilantro.  There was enough meat but they weren’t stuffed full which was fine by me.  It’s actually a nicely balanced sandwich with savory, tangy and some chew which made for a great snack.  Le’s makes quite a nice VN banh mi, wish I had an option like this in the Triangle.  From a foodie perspective, my short trip to Charlotte was a bang-up success!  Over the course of less than 24 hours I did Malaysian, French, Vietnamese and even snuck in some Swedish meatballs.  Plenty of good eating for this little fatty so thank you Amelie’s and thank you Le’s for making my ride home to the Triangle just a little bit easier, bon appetit!

Ambiance, Cocktails and Food at Clockwork on S. Glenwood
Next Post:Fresh Flavors Out of the New World, Neomonde in Raleigh