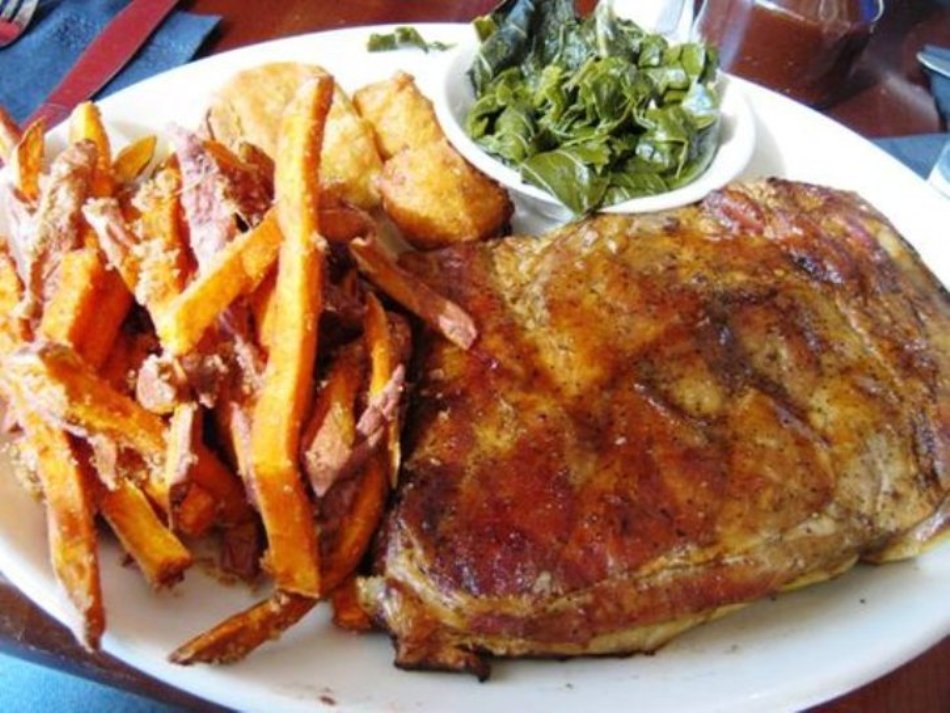 Retake: The Pit in Raleigh, Pork Beyond Its Prime?

When the Pit first opened up back in 2008, believe it or not, it was a bit of a hidden gem. Inexpensive barbeque raised up a level or two, I would come back over and over enjoying the simple eats in an upscale environment.  Out of the 500 or so reviews for the Pit on Yelp, I was the first.  And then, the Food Network steps in.  A couple of national TV shows profiled the Pit and Ed Mitchell, leading to all sorts of publicity and of course, crowds.  But I didn’t mind, the food was still good and I could always grab a meal at the bar and avoid the wait.  Then Ed Mitchell leaves and what to think?  My subsequent visits to the Pit just didn’t seem to have the same punch.  The Carolina ribs weren’t as good, the sides seemed lack-luster and the once hearty portions seemed to have been pared back. So the question begs to be asked, is the Pit still worth the wait and money?  With a GroupOn in hand, it was time for me to come on back!

I popped in on a Monday night, hoping to avoid the usual crush and sat at the bar.  Duck Rabbit Amber in hand, I perused the menu and it looked mostly the same.  Saw some soul (collard) rolls and bacon bruschetta but that was probably the only two new items.  Ordered up the three meat platter which was pretty pricey ($23.59) and went with que, fried chicken and brisket.  The place was still busy on a Monday and the bartenders were earning their pay!  Super efficient and professional service, the staff here is VERY well trained.  The starter basket of hushpuppies came with some honey-whipped cream butter, delish!  The hushpuppies were small, a bit greasy with a chewy coating.  Actually liked them quite a bit but let’s face it.  You put honey butter on pretty much ANY-thing and I’m liking it.

My plate comes out about 10+ minutes later and it looks good.  Nice heaping of que, one thigh and two 1/2″ thick slices of brisket.  I start off with the sides which are both decent.  Collards are cooked just tender, but could have used a bit more tang.  The beans were good but just a touch gummy, not quite the same as the three-bean version they used to have.  But it’s all about the meat here, amiright?  The queue was decent, a bit overcooked and not quite as spicy as it could have been.  Loved the chicken which was REALLY tender, thin flour crust that lifted off and not greasy at all (not that hot either).  The real winner of the meal was the brisket which was excellent.  Cut to the right thickness, fat cap covering the entire slice for a bit of super-flava and lightly seared on top.  The brisket was super soft and fell apart under fork.  Loved it but oh wow, this fat certainly can’t be good for me…

They take away my plate and then try to tempt me with dessert.  And it works (zero willpower here) so I order up the banana pudding.  There’s a delay in the kitchen, they drop off the plate 15+ minutes later and tell me it’s comped due to the delay.  Score!  The banana pudding is well done with a super-light meringue, some crust at the bottom, vanilla pudding and nanner. A great ending for the meal and perfect for 2 – 3 people.  Or one little piggy like myself.  I pushed the plate back and walked out fully stuffed and happy.  While I do miss Ed Mitchell’s smiling face, the Pit is still serving up some darn good grub.  Not the best but definitely solid eats in a cool environment.  My biggest complaint was that some of the food came out on the luke-warm side, a bit more heat would have been nice.  And $24 for the three meat plate is a bit steep but what can you do when you’re this popular?  So nice job to the Pit!  You’re not resting on your laurels and still doing a solid job.  Perfect for out of town visitors and family but if you’re coming here as a local I’d suggest sticking to Mondays and Tuesdays to keep the wait short.  Bon appetit!

Menu at the Pit

Gordon Ramsay’s Steak: Kitchen and Beef Nirvana!
Next Post:A Taste of the Mediterranean, Gravy and Sitti in Raleigh!