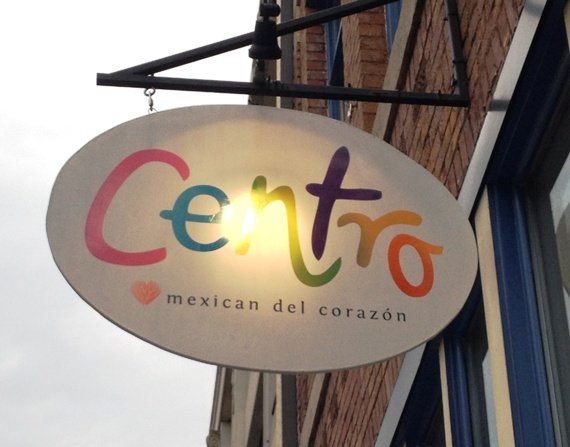 Centro in downtown Raleigh has been a Mexican staple for years.  My first taste of Centro came through a Taste Carolina food tour when it was still named Dos Taquitos.  I remember a small chicken tinga taco along with a tamarind margarita.  When I want more upscale Mexican I usually end up at Jibarra just because it’s been a long time favorite of mine but yeah, sometimes you gotta switch things up!  So finally last week I came in for a full meal at Centro and the place was bustling for a Wednesday night.  I grabbed a caipirinha at the bar which took a bit of time but it just meant that the table was ready when my drink arrived. The place is not just busy overall but given the narrow space and tables jammed close together, you’re probably not going to have a real peaceful meal.  Decor is heavy on the crosses and the walls are covered with a litany of Central American pieces and knick-knacks, again the key word is busy.  But who cares, it’s time to eat right?

I order up some queso and a carnitas plate, pretty basic stuff.  The queso is very good, reminds me of the dip at El Rodeo: rich, luscious and just the right consistency.  I could probably make a meal of this stuff.  The carnitas was interesting, a small crock of rich, fatty pork stewed in a green chile sauce.  A side of three small tortillas and sliced veggies (radishes, peppers) finished out the plate.  The carnitas was quite tender but I wished the sauce had a bit more kick; overall a solid effort.

Service was decent at the table, a definite improvement from the bar.  But I have to say I totally understand why I prefer Jibarra.  Similar food, but Jibarra has a lot more space and probably a bigger menu.  Oh and lower prices too, probably at least a dollar or two across the board.  Throw in the specials Jibarra usually has and it might be a lot cheaper.  So yeah, I like Centro and if you’re downtown it’s a good choice for upscale Mexican.  Just be willing to pay a bit more money and deal with a bit more noise, mi amigo.